Study: 'Giant Spinning Eddies' Have A Profound Influence On Marine Life And On The World's Climate 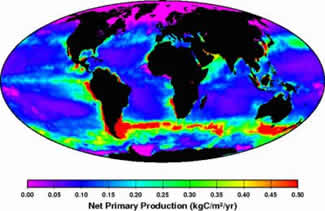 The global distribution of phytoplankton power generation as measured by satellite. Courtesy of William Dewar (FSU)

TALLAHASSEE, Florida -- Oceanographers worldwide pay close attention to phytoplankton and with good reason. The microscopic plants that form the vast foundation of the marine food chain generate a staggering amount of power, and now a groundbreaking study led by Florida State University has calculated just how much –– about five times the annual total power consumption of the human world.

Physical and biological oceanographers led by FSU Professor William Dewar put the yearly amount of chemical power stored by phytoplankton in the form of new organic matter at roughly 63 terawatts, and that's a lot of juice: Just one terawatt equals a trillion watts. In 2001, humans collectively consumed a comparatively measly 13.5 terawatts.

What's more, their study found that the marine biosphere –– the chain of sea life anchored by phytoplankton –– invests around one percent (1 terawatt) of its chemical power fortune in mechanical energy, which is manifested in the swimming motions of hungry ocean swimmers ranging from whales and fish to shrimp and krill. Those swimming motions mix the water much as cream is stirred into coffee by swiping a spoon through it.

And the sum of all that phytoplankton-fueled stirring may equal climate control.

"By interpreting existing data in a different way, we have predicted theoretically that the amount of mixing caused by ocean swimmers is comparable to the deep ocean mixing caused by the wind blowing on the ocean surface and the effects of the tides," Dewar said.

In fact, he explained, biosphere mixing appears to provide about one third the power required to bring the deep, cold waters of the world ocean to the surface, which in turn completes the ocean's conveyor belt circulation critical to the global climate system.

Findings from the FSU-led study ("Does the marine biosphere mix the ocean?") will appear in the forthcoming issue of the Journal of Marine Research, adding the role of major power broker to phytoplankton's already impressive credentials.

Scientists for some time have known that the highly sensitive plants act as reliable signals of environmental changes at or near the ocean surface through sudden declines or rapid growth –– and they have suspected that phytoplankton affect as well as reflect climate change when large, sustained plant populations gulp carbon dioxide from the atmosphere during grand-scale photosynthesis.

But along with the new calculations that point to the marine biosphere's bigger-than-expected role in ocean mixing and climate control, Dewar and his colleagues also suggest that human and environmental decimation of whale and big fish populations may have had a measurable impact on the total biomixing occurring in the world's oceans.