Officials: Health of India's Only White Crocodile, 'Gori', Said to be Failing 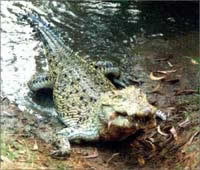 The health of India's only white crocodile, 'Gori', is said to failing

ORISSA, India -- The health profile of a rare estuarine female croc-Gori, country's only captive white crocodile caged in a pen in Bhitarkanika wildlife sanctuary, has deteriorated considerably since past one week, according to official sources.

While there is no palpable threat to her life at present, the ageing process is fast catching up the albino species. Since last Thursday, it has mostly turned immobile and was not sighted basking under early morning sunlight near the bed of the mini-pool.

What has made the forest personnel worried is that the caged reptile is showing signs of disinterest towards daily dose of food provided by the department. The sanctuary staff used to feed it with crab and fish thrice a day. As a forest staff put it, the caged animal has showed disinterest towards food and is being sighted lying motionless in pool water.

A veterinary surgeon from Chandballi in Bhadrak district periodically monitoring the reptile's health confided that the animal is visibly restless and is not as mobile as it was in past years. The sick animal is being kept under observation.

Declining to divulge the nature of sickness, the surgeon said that there is no immediate cause of concern. Commenting on the skipping of food habits on its part, the veterinary surgeon said that the crocodile on quite a few occasions in past has displayed such behavioural instinct.

The Bhitarkanika National Park officials on the other hand declined to elaborate on the state of the health of the animal and added that it is under constant observation of veterinary surgeons.

It's pertinent to note here that Gori, acclaimed as country's lone captive white crocodile, used to hog the spotlight over the years for its typical behavioral instinct. Living in isolation since its birth in the sanctuary since 1975, the animal had shunned mating habits despite several attempts made by forest personnel.

Things reached tragic proportion in the past as Gori had violently attacked the male partner that had been released into the pen for mating purpose. Gori lost its left eye in the clash with the male partner. The enigmatic Gori had put the wildlife personnel in a tight spot in past years for its poor health.

The 32-year-old crocodile, which has whitish patches all over the body, had been hatched and bred by the forest department as a part of crocodile conservation programme.