Sophisticated media machine blows whalers out of the water

Experts: Testing With Tsunami Generating Machine Could Minimize The Impact On Future Structures 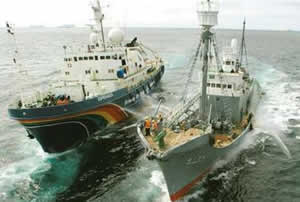 SYDNEY, Australia -- It is a hot battle in one of the world's coldest places, but the real heat is not in the confrontation between Japanese whalers and environmentalists or even the warm cetacean blood spilt for supposed research. The crucial heat is in the three-way struggle to harpoon public opinion.

Greenpeace, the world's largest and highest-profile environmental organisation, is pursuing the Japanese in the Southern Ocean with much more than its two ships, a helicopter and crew of 60.

In its wake is the smaller but even more controversial Sea Shepherd Conservation Society under command of its mercurial leader, Canadian born Captain Paul Watson. He told The Age he happily accepts the mantle of modern-day pirate and boasts of responsibility for sinking nine "illegal" whaling ships since 1979.

In the public opinion war Greenpeace's real rainbow warriors are not the activists in inflatable speedboats who place themselves between harpoons and whales and cop the blasts of the Japanese water cannon — they are largely the actors. The crucial fighters are on the other side of the lens. The organisation has contracted four world-class image specialists: two still photographers and two video camera operators who record the action and pump it out for the world's media.

Sea Shepherd has a different method of disseminating the message. On its smaller converted North Atlantic trawler is an embedded contingent of independent media including representatives from Australia's Seven network, National Geographic magazine, plus documentary filmmakers from the US, France, Brazil and Canada.

The whalers have a public relations machine too but nowhere as slick and well co-ordinated as the environmentalists', but for the first time they too have been releasing images.

For the Greenpeace team, their most important weapon is not necessarily the water spray designed to confuse the harpoonist's aim, but the new 24-hour satellite internet link, that allows them to send fresh broadcast-quality images in time for crucial western news bulletins.

So media-savvy is their operation, that even though they are on the edge of the Antarctic, they are able to respond to individual requests for images. For example one of the activists on board is Italian and although Italy is not a country known for environmental empathy, it does like heroes.

Maarten Van Rouveroy is the Greenpeace video producer who gathers and edits the images sent directly to their Amsterdam headquarters. "We haven't had as much exposure in Italy as other European countries, but an Italian TV station wanted to show the Italian activist at work, so we videoed him and sent them a clip, which they ran.

"We have offices and branches in 38 countries so we get lots of requests like that and we are usually able to oblige."

The Greenpeace footage and photographs are available free to the media. In Australia, New Zealand and most of Europe it is getting wide circulation, but questions are being asked about using such heavily edited material mainly from one side.

Of course, mounting such a campaign doesn't come cheap. Greenpeace communications director Mike Townsley said the whale wars were part of a much larger 14-month campaign to raise awareness of problems in the world's oceans. He estimates the three-month Southern Ocean component is costing them $1.6 million. This covers the wages of the ships' crew and other specialists, fuel, supplies and the all-important communications.

He said the cost of fuelling the two ships was around $9000 a day. But by using the internet satellite link they have been able to make a considerable saving. When they were just using straight satellite links he said it was costing them $800 for each three minutes of uploaded footage. "Now we are just paying $5000 a month for the link."

Of course the publicity doesn't hurt and is essential for filling the group's coffers, but Mr Townsley says he has no idea how much is being raised. "We don't do what we do for money, but we can't do it without money."

The other crucial information in this protest has been the location of the whaling fleet — something the Japanese prefer to be secret. Neither protest group is saying how it has busted the secret, but computer hacking has been mentioned by their opponents.

Sea Shepherd grew out of a split when Mr Watson, one of Greenpeace's founders, parted company in 1977 to pursue a more aggressive line. He told The Age he was not running a protest, rather a policing operation to uphold international law on whaling. The cost was about $750,000.

Still, his ship, the Farley Mowat, has been unable to keep up with the whalers and Greenpeace's lead ship, the Esperanza, a former Russian fire fighter. "Next year I am coming back with a much faster ship," he said.

WHAT THE ACTIVISTS ARE SPENDING ■Greenpeace two ships, 60 crew and volunteers. Total cost $1.6 million, including $5000 a month for satellite internet connection and $9000 a day to run ships.