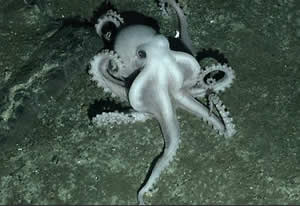 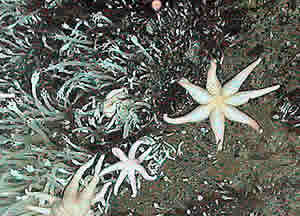 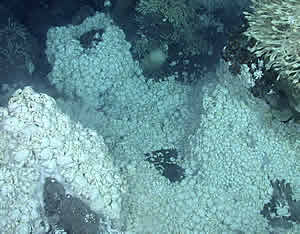 Communities of species previously unknown to science have been discovered on the seafloor near Antarctica, clustered in the hot, dark environment surrounding hydrothermal vents.

The discoveries, made by teams led by the University of Oxford, University of Southampton and British Antarctic Survey, include new species of yeti crab, starfish, barnacles, sea anemones, and potentially an octopus.

For the first time, researchers have used a Remotely Operated Vehicle (ROV) to explore the East Scotia Ridge deep beneath the Southern Ocean, where hydrothermal vents, (including 'black smokers' reaching temperatures of up to 382 degrees Celsius) create a unique environment that lacks sunlight, but is rich in certain chemicals. The team reports its findings in this week's issue of the online, open-access journal PLoS Biology.

"Hydrothermal vents are home to animals found nowhere else on the planet that get their energy not from the Sun but from breaking down chemicals, such as hydrogen sulphide," said Professor Alex Rogers of Oxford University's Department of Zoology, who led the research. "The first survey of these particular vents, in the Southern Ocean near Antarctica, has revealed a hot, dark, 'lost world' in which whole communities of previously unknown marine organisms thrive."

Highlights from the ROV dives include images showing huge colonies of the new species of yeti crab, thought to dominate the Antarctic vent ecosystem, clustered around vent chimneys. Elsewhere the ROV spotted numbers of an undescribed predatory sea-star with seven arms crawling across fields of stalked barnacles. It also found an unidentified pale octopus, nearly 2,400 metres down, on the seafloor.

"What we didn't find is almost as surprising as what we did," said Professor Rogers. "Many animals such as tubeworms, vent mussels, vent crabs, and vent shrimps, found in hydrothermal vents in the Pacific, Atlantic, and Indian Oceans, simply weren't there."

The team believe that the differences between the groups of animals found around the Antarctic vents and those found around vents elsewhere suggest that the Southern Ocean may act as a barrier to some vent animals. The unique species of the East Scotia Ridge also suggest that, globally, vent ecosystems may be much more diverse, and their interactions more complex, than previously thought.

In April 2011 Professor Rogers was part of an international panel of marine scientists who gathered at Somerville College, Oxford to consider the latest research on the world's oceans. A preliminary report from the panel in June warned that the world's oceans are at risk of entering a phase of extinction of marine species unprecedented in human history.

"These findings are yet more evidence of the precious diversity to be found throughout the world's oceans," said Professor Rogers. "Everywhere we look, whether it is in the sunlit coral reefs of tropical waters or these Antarctic vents shrouded in eternal darkness, we find unique ecosystems that we need to understand and protect."

ROV dives were conducted with the help of the crews of RRS James Cook and RRS James Clark Ross. The discoveries were made as part of a consortium project with partners from the University of Oxford, University of Southampton, University of Bristol, Newcastle University, British Antarctic Survey, National Oceanography Centre, and Woods Hole Oceanographic Institution supported by the UK's Natural Environment Research Council (NERC) and the US National Science Foundation (NSF).