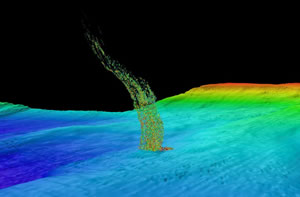 Sonar image of bubbles rising from the seafloor off the Washington coast. Credit: B. Philip / Univ. of Washington

Off the West Coast of the United States, methane gas is trapped in frozen layers below the seafloor. New research from the University of Washington shows that water at intermediate depths is warming enough to cause these carbon deposits to melt, releasing methane into the sediments and surrounding water.

Researchers found that water off the coast of Washington is gradually warming at a depth of 500 meters, about a third of a mile down. That is the same depth where methane transforms from a solid to a gas. The research suggests that ocean warming could be triggering the release of a powerful greenhouse gas.

"We calculate that methane equivalent in volume to the Deepwater Horizon oil spill is released every year off the Washington coast," said Evan Solomon, a UW assistant professor of oceanography. He is co-author of a paper to appear in Geophysical Research Letters.

While scientists believe that global warming will release methane from gas hydrates worldwide, most of the current focus has been on deposits in the Arctic. This paper estimates that from 1970 to 2013, some 4 million metric tons of methane has been released from hydrate decomposition off Washington. That's an amount each year equal to the methane from natural gas released in the 2010 Deepwater Horizon blowout off the coast of Louisiana, and 500 times the rate at which methane is naturally released from the seafloor.

"Methane hydrates are a very large and fragile reservoir of carbon that can be released if temperatures change," Solomon said. "I was skeptical at first, but when we looked at the amounts, it's significant."

Methane is the main component of natural gas. At cold temperatures and high ocean pressure, it combines with water into a crystal called methane hydrate. The Pacific Northwest has unusually large deposits of methane hydrates because of its biologically productive waters and strong geologic activity. But coastlines around the world hold deposits that could be similarly vulnerable to warming.

"This is one of the first studies to look at the lower-latitude margin," Solomon said. "We're showing that intermediate-depth warming could be enhancing methane release."

Co-author Una Miller, a UW oceanography undergraduate, first collected thousands of historic temperature measurements in a region off the Washington coast as part of a separate research project in the lab of co-author Paul Johnson, a UW professor of oceanography. The data revealed the unexpected sub-surface ocean warming signal.

"Even though the data was raw and pretty messy, we could see a trend," Miller said. "It just popped out."

The four decades of data show deeper water has, perhaps surprisingly, been warming the most due to climate change.

"A lot of the earlier studies focused on the surface because most of the data is there," said co-author Susan Hautala, a UW associate professor of oceanography. "This depth turns out to be a sweet spot for detecting this trend." The reason, she added, is that it lies below water nearer the surface that is influenced by long-term atmospheric cycles.

The warming water probably comes from the Sea of Okhotsk, between Russia and Japan, where surface water becomes very dense and then spreads east across the Pacific. The Sea of Okhotsk is known to have warmed over the past 50 years, and other studies have shown that the water takes a decade or two to cross the Pacific and reach the Washington coast.

"We began the collaboration when we realized this is also the most sensitive depth for methane hydrate deposits," Hautala said. She believes the same ocean currents could be warming intermediate-depth waters from Northern California to Alaska, where frozen methane deposits are also known to exist.

Warming water causes the frozen edge of methane hydrate to move into deeper water. On land, as the air temperature warms on a frozen hillside, the snowline moves uphill. In a warming ocean, the boundary between frozen and gaseous methane would move deeper and farther offshore. Calculations in the paper show that since 1970 the Washington boundary has moved about 1 kilometer - a little more than a half-mile - farther offshore. By 2100, the boundary for solid methane would move another 1 to 3 kilometers out to sea.

Estimates for the future amount of gas released from hydrate dissociation this century are as high as 0.4 million metric tons per year off the Washington coast, or about quadruple the amount of methane from the Deepwater Horizon blowout each year.

Still unknown is where any released methane gas would end up. It could be consumed by bacteria in the seafloor sediment or in the water, where it could cause seawater in that area to become more acidic and oxygen-deprived. Some methane might also rise to the surface, where it would release into the atmosphere as a greenhouse gas, compounding the effects of climate change.

Researchers now hope to verify the calculations with new measurements. For the past few years, curious fishermen have sent UW oceanographers sonar images showing mysterious columns of bubbles. Solomon and Johnson just returned from a cruise to check out some of those sites at depths where Solomon believes they could be caused by warming water.

"Those images the fishermen sent were 100 percent accurate," Johnson said. "Without them we would have been shooting in the dark."

Johnson and Solomon are analyzing data from that cruise to pinpoint what's triggering this seepage, and the fate of any released methane. The recent sightings of methane bubbles rising to the sea surface, the authors note, suggests that at least some of the seafloor gas may reach the surface and vent to the atmosphere.