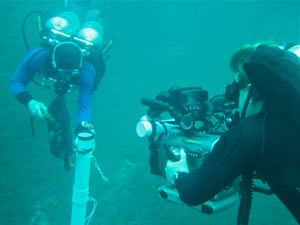 URBANA-CHAMPAIGN, Illinois -- Steering clear of crocodiles and navigating around massive submerged trees, a team of divers began mapping some of the 25 freshwater pools of Cara Blanca, Belize, which were important to the ancient Maya. In three weeks this May, the divers found fossilized animal remains, bits of pottery and â in the largest pool explored â an enormous underwater cave.

This project, led by University of Illinois anthropology professor Lisa Lucero and funded by the National Geographic Society and an Arnold O. Beckman Award, was the first of what Lucero hopes will be a series of dives into the pools of the southern Maya lowlands in central Belize. The divers will return this summer to assess whether archaeological excavation is even possible at the bottom of the pools, some of which are more than 60 meters deep.

"We don't know if it's going to be feasible to conduct archaeology 200 feet below the surface," Lucero said. "But they are going to try."

The Maya believed that openings in the earth, including caves and water-filled sinkholes, called cenotes (sen-OH-tays), were portals to the underworld, and often left offerings there. Ceremonial artifacts of the Maya have been found in pools and lakes in Mexico, but not yet in Belize.

Maya structures have been found near two of the eight pools the team surveyed.

"The pools with the most substantial and most obvious settlement at the edge also turn out to be the deepest that we know," Lucero said. The divers so far have explored eight of the 25 known pools of Cara Blanca.

The use of these pools at the end of the Late Classic period (roughly A.D. 800-900) corresponds to an enduring drought that deforested parts of Central America and â some believe â ultimately drove the Maya from the area.

The need for fresh water could have drawn the Maya to the pools, Lucero said. No vessels other than water jars were found in the structures built near the pools.

"They could have been making offerings to the rain god and other supernatural forces to bring an end to the drought," she said.

Patricia Beddows, one of the divers and a hydrologist and geochemist at Northwestern University, found that the chemistry of the water in each of the pools was distinct. She also found that the water in Pool 1, the pool with the huge cave and a Maya structure at its edge, held the freshest water of the pools surveyed. But the water contained a lot of soluble minerals, Lucero said, making it problematic for anyone who used it as their primary water supply. Those who drank the water over an extended period would have been at risk of developing kidney stones, she said.

The divers extracted core samples of the sediment at the bottoms of two of the pools. An analysis of the soil, debris and pollen in the cores will offer insight into the natural history of the cenotes and the surrounding region.

The research team also included archaeologist Andrew Kinkella, of Moorpark College. In Pool 1, Kinkella and diver Edward Mallon recovered ceramic jar shards in the wall of the pool just below the Maya structure.

Lucero has studied Maya settlements and sacred sites in Belize for more than 20 years, and works under the auspices of the Institute of Archaeology, which is part of the National Institute of Culture and History, Government of Belize.