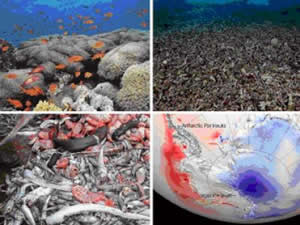 The simultaneous effect of habitat fragmentation, overexploitation, and climate warming could accelerate the decline of populations and substantially increase their risk of extinction, a study published in the Proceedings of the Royal Society B has warned.

Using experimental microcosm populations of rotifers (a type of zooplankton), the study found that individually each of these threats caused significant population declines. The study also found that the rate of declines was much accelerated when populations were exposed to more than one threat. These results indicate that multiple interacting threats are capable of causing rapid population extinction, and that all threats should be simultaneously reduced, if their synergies are to be avoided and if the current rate of species loss is to be reversed.

Many scientific efforts have been made to link the decline of wild marine and terrestrial populations with human activities such as habitat fragmentation, overexploitation and global warming. "Establishing the link between the loss of biodiversity and human-related threats is crucial to develop policies aimed at mitigating such threats", says Camilo Mora at Dalhousie University, leading author of the paper. "Unfortunately, in many cases several threats are operating simultaneously making it difficult to isolate their individual and combined effects through field observations,"Mora adds.

This new study used an experimental approach that has been broadly used in ecology to shed light into complex ecological processes. In this approach, populations of rotifers were maintained at equilibrium under laboratory conditions and then exposed to the simulated effect of exploitation, habitat loss and warming. Changes in population size were then quantified and compared to the changes occurred among populations that were not impacted.

"Our experiment clearly shows that exploitation, habitat loss ad warming are equally capable of causing significant population declines," Mora says. "More importantly, our results showed that the stress induced by any one threat impairs the ability of populations to resist or adapt to other threats. Populations exposed to more than one threat declined drastically. Population declines were up to 50 times faster when all threats operate at their maximum extent upon a given population."

"It is hard to think of a system that would not be exposed to several threats at once," says Nancy Knowlton, from the Scripps Institute of Oceanography. "Coral reefs, as an example, are being overexploited to satisfy food demands and the trade of ornamental species. They are also harmed by blast fishing, coastal development and pollution, all of which directly or indirectly kill the corals and leave them vulnerable to erosion and loss of their complex matrix. Habitat loss is also occurring in areas that are very important to the ecological functioning of coral reefs such as estuaries and mangroves. Finally, it, is the widespread effect of ocean warming, which is evident by the regional to global scale patterns of coral bleaching and mortality when temperature increases only few degrees. It is not surprising then that in regions like the Caribbean, where coral reefs are relatively well monitored; up to 80% of the coral cover has been lost in recent times. Similar rates of decline have also been reported for estuaries, mangroves, and coastal and oceanic fish communities."

"An accelerated decay in biodiversity due to interacting human-threats has been long suspected among ecologists and conservation biologists," Mora says. "This study reveals the potential for multiple threats to enhance each other effects. Now we have an idea of the speed at which populations can decay when exposed to several threats," he adds.

The scientific uncertainty related to the effect of human-related threats should alone be a good reason to deploy the precautionary approach and develop earnest mitigation policies. This new experiment confirms the deleterious and harmful interaction of most human threats and the urgent need for preventing them simultaneously.