Scientists: Traces Of Mercury In Seafood Is Not A Health Hazard; 'This Is Groundbreaking News' 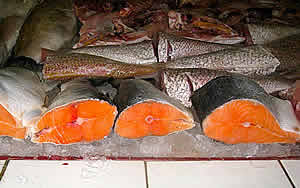 SANTA BARBARA, California -- Most people think of seafood as either wild or farmed, but in fact both categories may apply to the fish you pick up from your grocery store. In recent years, for example, as much as 40 percent of the Alaskan salmon catch originated in fish hatcheries, although it may be labeled "all wild, never farmed."

An article produced by a working group of UC Santa Barbara's National Center for Ecological Analysis and Synthesis (NCEAS) recommends that when a combination of seafood production techniques are used, this be acknowledged in the marketplace. The group calls on national and international organizations and governmental agencies to use the term "hybrid," when applicable. The article is in press with Marine Policy, and is currently available online.

"Farming fish and shellfish is generally a different way to produce seafood than fishing," said Dane Klinger, first author and a Ph.D. student at Stanford University. "While fisheries traditionally interact with their target population only at the time of capture, aquaculture, in its 'purest' state, controls the entire lifecycle of the organism, from egg to harvest. However, many common types of seafood are produced using techniques from both fisheries and aquaculture."

Mary Turnipseed, second author and a former postdoctoral fellow at NCEAS, commented: "Seafood production is a critical part of global food security, but the way we study and talk about it often obscures how to achieve the thing we care the most about: increasing the supply of sustainably produced seafood to feed a rapidly growing human population. We need to start collecting more accurate data on how seafood is really produced in today's world, and a first step will be through replacing the old farmed-fished dichotomy with a farmed-fished-hybrid classification scheme."

The article reveals how the strictly traditional categories of seafood production ââ fisheries and aquaculture ââ are insufficient to account for the growth potential and environmental impacts of the seafood sector. The authors examine several popular seafood products that are harvested using a combination of techniques generally ascribed to either fisheries or aquaculture.

The authors reviewed several cases of fisheries that are augmented by aquaculture. In addition to the example of hatcheries stocking Pacific salmon in Alaskan fisheries, hatcheries also stock scallops in New Zealand waters, and eastern oysters in the Chesapeake Bay, according to the authors. And American lobsters are fed by bait placed in traps until they reach legal catch size. In fact, the amount of bait provided to lobsters in one season is often greater than the volume of lobster catch in the same season, by a factor of two.

In aquaculture, the lines are often blurred ââ fishing may be involved in production. For example, Bluefin tuna farms obtain their stock by fishing. These farms also fish for feed, and use 10 to 20 kilograms of fish for every kilogram of tuna they produce.

The primary source of information about the world's fisheries and aquaculture enterprises is the United Nation's Food and Agriculture Organization (FAO). However, the authors explain that the reporting of data from many developing and developed countries to the FAO is incomplete. They note that for the 52 percent of countries that do submit adequate data, "adding a hybrid production category would help elucidate their national understanding of domestic seafood production, as well as enhance global understanding of an important food sector."

The authors conclude by stating the urgency of adding the hybrid category: "Without these data, transformations in the market for a critical food and livelihood source for billions of people could occur, with global analysts and policymakers being the last to know."