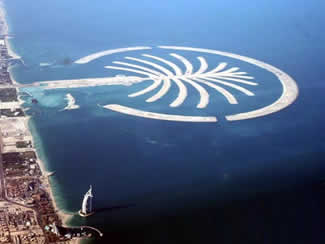 DUBAI, United Arab Emirates -- Palm Jumeirah, a man-made island off Dubai, is bracing for the arrival of its first residents, even as questions remain about the environmental impact of the mega-projects under way in the Gulf city state.

"These projects are a positive thing for the country" since they have propelled Dubai to world fame, said environmentalist Ibrahim al-Zu'bi.

But "they are introducing more people, so it's more pressure on the natural resources," he told AFP.

A few miles from Palm Jumeirah, shaped like a palm tree and the first of several artificial islands rising off the coast, work is continuing on "The World", a cluster of some 300 islands looking like a blurred vision of the planet's nations.

"The World," which is due to be completed end-2008, and three "Palm" islands are the work of Nakheel, a government-controlled property developer.

Nakheel recently announced that it would hand the keys of 3,900 flats and villas on Palm Jumeirah to their owners by year's end, some six months behind schedule.

The last to take delivery of their properties on the five-by-five-kilometer (three-by-three-mile) island will be running more than a year behind schedule.

Prices for the most luxurious villas on the island, whose construction kicked off five years ago, top four million dollars.

"By early to mid-December, there will be people living right on the Palm," a spokesman for Nakheel told AFP, asking not to be named.

The arrival of the first residents on the island will follow a publicity blitz starting November 9 in London, where a huge airship chartered by Nakheel will overfly the city's landmarks in order "to show that the Palm is the world's latest landmark," the spokesman said.

Repeats are planned in Paris, Milan and Rome, reflecting the key role played by European investors in the real estate boom in Dubai, which is a member of the United Arab Emirates. A similar publicity stunt will take place in Cairo.

Work is meanwhile also continuing on two other palm tree-shaped islands even bigger than Palm Jumeirah.

One, Palm Jebel Ali, is jutting out into Gulf waters to the west. The other, Palm Deira -- planned to be 18 kilometers (11 miles) long and nine kilometers (five miles) wide but still in its early stages -- is emerging to the east.

In the case of "The World," Nakheel's task is confined to bringing the islands up from the Gulf's shallow waters, leaving it to buyers to develop them within strict guidelines, chiefly in relation to the height of buildings.

Nakheel says 50 percent of the islands have already been sold, with price tags ranging from 15 to 40 million dollars.

But several years after the launch of the island ventures, their consequences on the marine environment remain a matter of debate.

"The environment is very important to us," said Adnan Dawood, a Nakheel spokesman.

Before the man-made islands began taking shape, the zone attracted migratory fish, Dawood said. Today "you have fish where there was no fish before, because now they have a habitat," he said.

"Fifteen new species of fish have made this (The World) their habitat... Today you can (even) see dolphins," he added.

Zu'bi, who serves as director of the Emirates Diving Association's environment department, was skeptical about Dawood's assertions.

While admitting that the ventures have positive aspects -- "new beaches, new diving sites, dolphins" -- he chided developers for lack of communication. "We are open to work with them in a positive way (but) they ignore us," he said.

"When it comes to the environment, you can't be as fast as you want. You have to compromise things. Things are going fast here," Zu'bi said in reference to the breakneck speed at which Dubai is growing.

"What happened in Europe in 50 years is happening here in five years," he said.