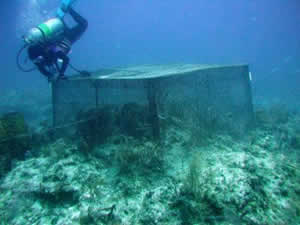 Diver Anne Prusak works on a cage used to contain fish atop a coral reef to study the role of diversity among herbivorous fishes. Photo: Deron Burkep 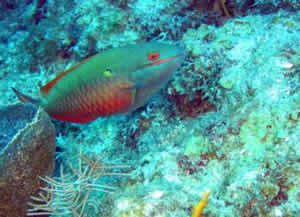 The redband parrotfish was one of the species studied as part of research into the importance of diversity for coral reef health. Photo: Deron Burkepi

ATLANTA, Georgia -- For endangered coral reefs, not all plant-eating fish are created equal.

A report scheduled to be published this week in the early edition of the journal Proceedings of the National Academy of Sciences suggests that maintaining the proper balance of herbivorous fishes may be critical to restoring coral reefs, which are declining dramatically worldwide. The conclusion results from a long-term study that found significant recovery in sections of coral reefs on which fish of two complementary species were caged.

Coral reefs depend on fish to eat the seaweeds with which the corals compete, and without such cleaning, the reefs decline as corals are replaced by seaweeds. Different fish consume different seaweeds because of the differing chemical and physical properties of the plants.

"Of the many different fish that are part of coral ecosystems, there may be a small number of species that are really critical for keeping big seaweeds from over-growing and killing corals," explained Mark Hay, the Harry and Linda Teasley Professor of Biology at the Georgia Institute of Technology. "Our study shows that in addition to having enough herbivores, coral ecosystems also need the right mix of species to overcome the different defensive tactics of the seaweeds."

By knowing which fish are most critical to maintaining coral health, resource managers could focus on protecting and enhancing the highest-impact species. In situations where local peoples depend on fishing, they might better sustain the reefs on which they depend by harvesting only less critical species.

"This could offer one more approach to resource managers," Hay added. "If ecosystems were managed for critical mixes of herbivorous species, we might see more rapid recovery of the reefs."

Believed to be the first study to demonstrate the importance of herbivore diversity in enhancing the growth of coral reefs, the research was conducted at the National Undersea Research Center in Key Largo, Florida. It was supported by the National Oceanic and Atmospheric Administration, the National Science Foundation and the Teasley Endowment at Georgia Tech.

Working 60 feet below the surface near the underwater laboratory Aquarius, Hay and co-author Deron E. Burkpile – who is now at Florida International University in North Miami – constructed 32 cages on a coral reef. Each cage was about two meters square and one meter tall and was sealed so that larger fish could neither enter nor leave.

The number and type of fish placed into each four-square-meter cage varied. Some cages had two fish that were able to eat hard, calcified plants; some had two fish able to eat soft, but chemically-defended plants; some had one of both types, and some had no fish at all. The cages were observed for a period of ten months starting in November 2003, and the change in coral cover and seaweed growth was measured.

"For the cages in which we mixed the two species of herbivores, the fish were able to remove much more of the upright seaweeds, and the corals in those areas increased in cover by more than 20 percent during ten months," Hay said. "That is a dramatic rate of increase for a Caribbean reef."

Though the percentage growth was impressive, the actual growth in size of each coral was small, Hay noted. Prior to the experiment, the coral reef areas studied had just four to five percent coverage of live coral. After ten months, the corals caged with the two species showed six to seven percent coverage. Corals caged with just one type of fish or no fish lost as much as 30 percent of their cover during the time period.

Hay and Burkepile attempted to repeat their experiment with a different species of fish, but the underwater cages were wiped away by Hurricane Dennis in July 2005 after only seven months of study.

The researchers studied the effects of the redband parrotfish (Sparisoma aurofrenatum) and the ocean surgeonfish (Acanthurus bahianus) in the first experiment, and the redband parrotfish and princess parrotfish (Scarus taeniopterus) in the second. The two fish per cage was at the "high end" of fish density found on present-day Caribbean reefs, but historic densities might have been much higher before extensive fishing of the Caribbean, Hay said.

Just two decades ago, coral coverage in the Caribbean was commonly 40 to 60 percent. Scientists blame many factors – disease, overfishing, pollution, excessive nutrients and global climate change – for the rapid decline, which has also been seen to differing degrees among coral reefs worldwide.

"Some people would argue that coral reefs really don't exist as functional ecosystems in the Caribbean anymore," Hay said. "The best reefs we have today are poor cousins to what was only average 20 years ago."

For the future, Hay would like to expand the experiments to study the effects of additional species, and repeat the studies in different areas, such as the Fiji Islands, where residents are concerned about sustainability of the coral reefs. Though dependent on local fish for their protein, he said the Fiji Islanders may be able to change their fishing habits if researchers can determine which fish must be protected to help the reefs.

"The data we are seeing in Fiji suggests that diversity may be even more important there than it was in the Caribbean," he said. "There are a lot of different species doing a lot of very different things. These consumers are very important, and in areas where they are over-fished, the reefs are crashing."

The study provides more proof of how important biodiversity can be to maintaining healthy ecosystems.

"Species diversity is critically important, but we are losing critical components of the Earth's ecosystem at an alarming rate," Hay said. "There has been little work on the role of diversity among consumers and the effect that has on communities. This study will help add to our knowledge in this critical area."