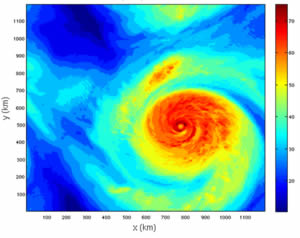 Image shows an example of a hurricane computer simulation generated by the Rosenstiel School team. Courtesy of UM/RSMAS.

In a study published in the July 2008 issue of Geophysical Research Letters, Drs. David S. Nolan and Eric D. Rappin from the University of Miami’s Rosenstiel School of Marine and Atmospheric Science describe a new method for evaluating the frequency of hurricane formation in present and future tropical climates. While current thinking about changes in hurricane frequency comes mostly from computer simulations of global climate, the computer models used for these studies can only represent the coarsest features of hurricanes, thus casting doubt in their predictions of hurricane activity.

The new approach by Nolan and Rappin, developed in collaboration with Dr. Kerry Emanuel of the Massachusetts Institute of Technology, uses computer models with much more accurate representation of the processes that lead to hurricane formation, much the same way a digital image with more pixels allows for a more detailed photographic image. The models are used to simulate the rate of hurricane development in tropical atmospheres with varying values of sea surface temperature and vertical wind shear (which is the extent to which wind speed and direction changes with height in the atmosphere). These two variables – ocean temperature and wind shear -- are considered to be the two most important factors in predicting hurricane activity, both in operational forecasting and in consideration of climate change.

“We designed the computer simulations to show that as the ocean temperature increased, hurricanes would form more rapidly and easily, even in the presence of wind shear,” says Nolan, associate professor of Meteorology at the Rosenstiel School. “Instead, we got exactly the opposite result. As the water temperature increased, the effectiveness of the wind shear in suppressing hurricane formation actually became greater.”

The simulations show that if they do form, hurricanes become stronger in the warmer environments. Together, these results suggest that in a global warming world, there would be less hurricanes, but those that do form could become stronger. The same prediction has recently been made by other studies using global climate models, and the similarity of the two predictions enhances confidence in the results.

“The additional aspect that our method offers is a much more accurate picture of the process of tropical storm and hurricane formation, as compared to the global models,” Nolan said. “Our ongoing work with this model and others should lead to a much better understanding of the relationship between climate and global hurricane activity.”