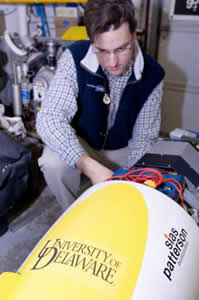 Using a novel underwater robot, University of Delaware marine scientists will help reveal the mysteries of the Black Sea's geology and maritime history, including ages-old shipwrecks, during an international expedition that is now underway.

Robert Ballard, professor of oceanography at the University of Rhode Island, and president of the Institute for Exploration, is the principal investigator on the research cruise, which will include a multidisciplinary team of scientists from several nations.

"This is a truly exciting expedition that will shed light on important geological features in the Mediterranean while also uncovering vital information about ancient trade routes and the maritime history of the Black Sea," Ballard said.

Perhaps best known for locating the sunken ocean liner Titanic in 1985, Ballard has received numerous honors for scientific research and public education. He was awarded an honorary doctor of science degree by UD in 2001.

Last year, in partnership with the Department of Underwater Heritage in Ukraine, Ballard's research team located numerous shipwrecks in the Black Sea, including a vessel from the Byzantine period that will be revisited and explored during this expedition.

The research vessel NRV Alliance will serve as the scientists' home, lab and the platform from which remotely operated vehicles with high-definition cameras will be deployed to provide high-resolution images of the deep.

From the Ukrainian research vessel Flamingo, Art Trembanis, UD assistant professor of marine and Earth studies, and graduate students Adam Skarke and Stephanie Nebel, together with colleagues from the Center for Coastal and Ocean Mapping at the University of New Hampshire and Ballard's own team, will operate the autonomous underwater vehicle (AUV) DOERRI (pronounced "Dory"), which stands for "Delaware Oceanographic and Environmental Research Remote Instrument."

"My students and I are tremendously honored to be participating in this unprecedented project," Trembanis said. "We are working with a real pioneer in the field of ocean exploration--a hero and mentor to an entire generation of marine scientists, myself included," he noted.

"As a child, I remember waking up early on Saturday mornings not to watch cartoons, but to catch the latest National Geographic Explorer episode that Dr. Ballard might be hosting, and now I find myself fulfilling a childhood dream to work alongside Dr. Ballard and his expert team of researchers. It is truly exciting," Trembanis said.

The 83-inch-long, 240-pound DOERRI, which Trembanis designed, will map the seafloor of the Black Sea off Sevastopol, Ukraine, on missions up to 14 hours long and to depths of approximately 200 meters (656 feet).

The DOERRI carries a sophisticated sensor system including devices to measure salinity, temperature and oxygen levels and two types of advanced sonar systems for mapping the seafloor. Multiple computers and safety features work in tandem to keep the systems operating, and to safely return the vehicle back to the ship at the end of each day.

In many ways, DOERRI may serve as the scientists' "agent into the unknown" much like the AUV's namesake, the cartoon fish "Dory," did in the Disney film Finding Nemo.

"Just like her eponymous namesake, we hope that DOERRI will be a finder of lost things," Trembanis said. "We hope DOERRI will provide unrivaled data that will allow us to discover very ancient shipwrecks, previously unknown, on the Black Sea floor," he noted. "Along the way, DOERRI will also give us new insights into the dynamics of dissolved oxygen and internal waves that help to shape and mold the seafloor."

Shipwrecks in the Black Sea often are remarkably well-preserved due to the waterway's chemistry. Nearly 90 percent of the Black Sea is a no-oxygen "dead zone," where only a few bacteria live.

"At depths beyond 150 meters, the Black Sea is not unlike a giant natural bell jar from which life-supporting oxygen has been entirely removed," Trembanis said.

A major advantage of AUVs like DOERRI, Trembanis said, is that they allow researchers to literally become more immersed in the marine environment.

"By severing the cord to the surface, we become more a part of the environment we are studying because we can approach things just as a curious fish might do," Trembanis said. "In real terms, the AUV provides capabilities to get below the influence of surface conditions and get closer to the features on the seafloor we wish to study without actually touching or disturbing anything around us. Furthermore, we can ask the robot to do critical but perhaps monotonous tasks over and over again--tasks that give us great scientific data, but tasks that would seem boring to human operators."

Locally, DOERRI has been used in a variety of research in Delaware's coastal waters, including nearshore areas of Delaware Bay and the Atlantic Ocean and in Delaware's Inland Bays.

While this will be the DOERRI's farthest trip from home so far, it likely will not be its last. Trembanis said the leading-edge robot already is scheduled for another international mission, to explore the coral reefs off Bonaire, early next year.