New South Florida Nursery To Focus On Staghorn Corals; 'We Have To Explore All Available Options' 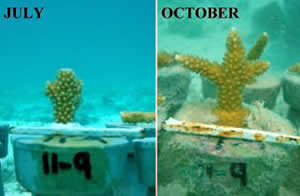 Fragment of staghorn coral illustrates the fast re-growth of the species between July and October 2007. Credit: James Herlan

CORAL GABLES, Florida -- In response to the need for localized efforts to protect and recover the surviving populations of the threatened staghorn coral, Diego Lirman, Ph.D., and James Herlan, researchers from the University of Miami’s Rosenstiel School of Marine and Atmospheric Science (RSMAS) have established an underwater nursery dedicated to the propagation of staghorn corals.

The goals of the coral nursery are to develop effective coral fragmentation and propagation methodologies, and to evaluate the role of coral genetics on the resilience of this species to disturbance. A total of 250 fragments of staghorn coral have been collected to date, and placed on cement platforms where they are individually measured at monthly intervals to assess growth and mortality patterns. It is expected that the staghorn fragments kept in the nursery will provide an expanding coral stock to be used in future reef restoration, as well as in scientific experiments.

Until recently, branching Elkhorn (Acropora palmata) and Staghorn (Acropora cervicornis) corals were among the most abundant reef-building corals in Caribbean and Florida reefs. However, in the last few decades a drastic regional decline of this genus has been recorded due mainly to elevated temperatures, coral diseases, and the impact of hurricanes. This region-wide decline, which has resulted in losses of up to 95 percent of colonies at several locations, has prompted the listing of these species as “threatened” under the U.S. Endangered Species Act in 2006.

“The fast growth rate of this particular coral species (up to 15 cm per year) makes it an ideal candidate for reef restoration programs,” said Dr. Lirman, RSMAS assistant research professor and director of the coral nursery. “Faced with declining coral populations worldwide, we have to explore all available options to protect and expand surviving populations of these resources which are vital to the overall health of our reef systems. Coral nurseries provide a unique opportunity to learn about coral growth and survivorship patterns, as well as how to stabilize corals damaged by natural physical disturbances or through human activity.”

The new underwater nursery, located in the waters of Biscayne National Park, is part of a network of Acropora nurseries established with support from The Nature Conservancy, NOAA, and the National Park Service. Additional staghorn nurseries are presently located in Broward County, and in the Upper and Middle Florida Keys.