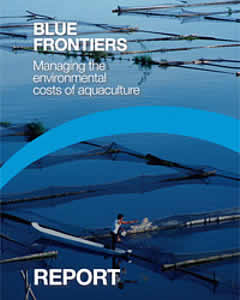 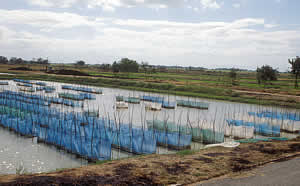 A new and comprehensive analysis released by WorldFish Center and Conservation International (CI) has investigated the environmental impact of the world's major aquaculture production systems and species, and today offers a first-ever global assessment of trends and impacts of cultivated seafood. The analysis has found that, from the 75 species-production systems reviewed, more production means more ecological impact, but that compared to other forms of animal protein production such as livestock, aquaculture is more efficient.

The report, "Blue Frontiers: Managing the environmental costs of aquaculture (pdf - 41MB)", along with a companion policy recommendations paper, is being released in Bangkok, Thailand at the ASEAN SEAFDEC Conference (Association of Southeast Asian Nations, Southeast Asian Fisheries Development Center) on "Sustainable Fisheries for Food Security Towards 2020". It concludes that the demand for aquaculture products will continue to grow over the next two decades as a key source of animal protein for growing urban populations, and that the industry needs to meet this demand with improved efficiencies and reduced environmental impacts.

Among the landmark report's major findings are two key highlights: (1) the environmental impact of aquaculture varies dramatically by country, region, production system and species , and (2) a review of published information found that aquaculture is more efficient and less damaging to the environment, compared to other animal protein production systems such as beef and pork, and likely to be among the most important sources of protein for human health and nutrition in growing urban populations in many parts of the developing world. Meaning — there is great room for improvement, by identifying and sharing best practices, increasing investment in innovation, and strengthening policies and regulations.

Driving the scientists' research was the recognition of aquaculture as one of the fastest growing food production sectors in the world: it has grown at an average annual rate of 8.4 percent since 1970 and total production reached 65.8 million tonnes in 2008 according to the Food and Agriculture Organization of the United Nations (FAO). Today, aquaculture is a US $100+ billion industry that now provides more than half of all seafood consumed in the world, surpassing wild-caught seafood.

"This report offers the most comprehensive analysis of global aquaculture ever undertaken, and illustrates the opportunities and challenges that lie ahead," said Dr. Stephen Hall, lead author of the report and Director General of the WorldFish Center. "As the report points out, there must be a wider exchange of knowledge and technology, with policies and action to promote sustainability and investment in research to fill the knowledge gaps. These efforts can lead to a more ecologically sustainable industry — an important goal, if we are to meet the world's future needs and demands for fish."

Fish, as compared to either pork or beef, convert a higher percentage of the food they eat into consumable protein, resulting in less waste

Looking toward the future of seafood cultivation, "Blue Frontiers" projects that global aquaculture production will continue to grow at current rates, with conservative estimates of 65-85 million tones produced in 2020, and 79-110 million tones by 2030. By comparison, 69 million tonnes of cultivated seafood were produced in 2008.

"China, India and the rest of Asia with their growing middle classes are where we can expect demand for fish to rise most significantly" said co-author Mike Phillips, a senior scientist at WorldFish. "Current trends indicate that the majority of the increase in global production will come from South and Southeast Asia, with a continued drive by major producer counties such as China and Vietnam towards export to European and North American markets."

How this rise in production will be achieved in an environmentally sustainable manner raises important issues, said Dr. Sebastian Troëng, CI's Vice President for Marine Conservation. "There are a number of well-founded concerns about aquaculture, in terms of its impacts on marine ecosystems and wild fisheries. But with global fisheries reaching alarming and unprecedented levels of depletion, fish cultivation versus wild fish capture has to be considered. We believe that intensified investment in innovation and the sharing of best practices will help us meet the growing demand while not putting unacceptable strain on coastal and freshwater environments."

CI's Executive Director for Indonesia Ketut Putra, who's attending talks in Bangkok, added, "With governments in the region looking to aquaculture to meet demand for animal protein, we need to better understand the environmental costs of expanding aquaculture. This report will be tremendously helpful in showing us which species and production systems we should favor to keep environmental costs down."

The report offers multiple recommendations to policy makers, development and environmental organizations, and industry professionals in a companion policy paper. They include: supporting innovation in the aquaculture sector; ensuring the regulatory environment keeps pace and supports environmental considerations in aquaculture development; developing the necessary capacity in national agencies, and careful monitoring of the sector so that support and investment are appropriate to the market opportunities are core recommendations that apply globally but will have regional differences in their relative importance.