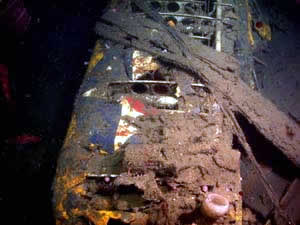 A port wing of one of four Curtiss Sparrowhawk F9C-2 biplanes found at the USS Macon site. credit NOAA / MBARI. 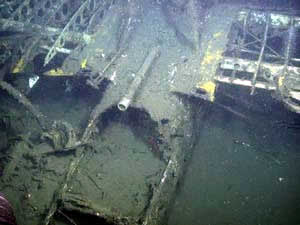 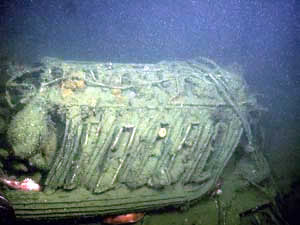 STANFORD, California -- he 1935 crash of the Navy zeppelin USS Macon off the California coast marked an inglorious end to a unique experiment in aviation. Four times longer than a modern Goodyear blimp, the Macon could carry 100 crewmembers, including pilots specially trained to fly small reconnaissance airplanes stowed in the zeppelin's massive hull. The giant airship was one of only two ''flying aircraft carriers'' ever built, and both went down in the ocean without ever seeing combat.

In September 2006, 71 years after the Macon plunged into the Pacific, a team of marine researchers, including engineers from Stanford University, conducted the first comprehensive survey of the airship's final resting place on the floor of Monterey Bay more than 1,000 feet below sea level.

The story of the Macon and the Navy's ill-fated zeppelin program has long fascinated military historians and aircraft aficionados. Over the years, a surprising number of faculty, students and alumni from the Stanford School of Engineering have played a crucial role in bringing that story to light.

Navy officials had high hopes when the Goodyear company began construction of the Macon and its twin sister, the USS Akron. Unlike inflatable blimps, the two airships were built with rigid hulls made of aluminum alloy and were kept aloft by 12 large, helium-filled cells inside the hull.

Each zeppelin was 785 feet long and uniquely designed to carry five single-pilot Sparrowhawk biplanes that could be released and retrieved in mid-air using a special skyhook-trapeze mechanism. Although weighing 200 tons when fully loaded, the airship could reach speeds of 80 miles per hour thanks to eight large propellers driven by eight powerful gasoline engines built by the Maybach company of Germany.

In 1933, the Macon was deployed to the West Coast and berthed at a specially built hangar at Moffett Air Field in Sunnyvale, Calif., a few miles from the Stanford campus. The enormous hangar-large enough to hold a luxury cruise ship-remains a Bay Area landmark.

According to Moffett Field historians, the Navy planned to use the Macon and its Sparrowhawks as long-range reconnaissance for the Pacific Fleet, warning Navy battleships of distant threats from air and sea.

But the promise of the Navy zeppelin program was short-lived. On April 4, 1933, the Akron went down in a storm off the New Jersey coast, killing 73 crewmembers. Then, on Feb. 12, 1935, heavy winds forced the Macon to crash into the Pacific.

Only two of the Macon's 83-man crew died in the accident, but the spectacular failure of both airships prompted President Franklin Roosevelt to appoint retired Stanford engineering Professor William F. Durand to head a commission to re-evaluate the Navy's use of zeppelins. A former naval officer and marine engineer, Durand had established Stanford's first aeronautics course in 1915 and later became a prominent voice in national aeronautics policy.

Although the Durand commission concluded that the military should not abandon lighter-than-air technology, the zeppelin program was terminated. The Macon would be the last rigid-body airship built in the United States.

Within days of the Macon disaster, efforts were made to find the wreckage, according to Moffett Field historians. But it wasn't until a half-century later that advances in deep-sea exploration made searching feasible. Renewed recovery efforts began in the 1980s, inspired by a handful of dedicated historians and engineers-including Stanford alumnus David Packard, co-founder of Hewlett-Packard Co.

A Silicon Valley icon, Packard also founded the Monterey Bay Aquarium Research Institute (MBARI) in 1987 to explore the deep sea using remotely operated vehicles (ROVs) equipped with cameras. Finding the Macon would soon be at the top of his agenda. Packard's fascination with the zeppelin was kindled in 1933 when he was completing his undergraduate engineering degree at Stanford. The Macon was a common sight back then as it shuttled to and from its hangar at nearby Moffett Field.

''Dave told me that students at Stanford would stop what they were doing, run to the top of their building and gaze with awe at the Macon flying overhead,'' recalled Chris Grech, deputy director for marine operations at MBARI. ''He said that the large size, the rumbling noise of eight Maybach engines and the large shadow that was cast was something to behold.''

In 1989, Packard financed an MBARI expedition to find the lost airship. Grech led the one-day cruise, with Packard and other observers on board. But it wasn't until 1990 that Grech led a Navy expedition that finally located the wreckage, which turned out to consist of two large debris fields reaching depths of about 1,400 feet below sea level. In 1991, Grech and his MBARI colleagues used an ROV to videotape the wreckage and bring back haunting images of the Macon's four Sparrowhawk fighters and several Maybach engines, as well as damaged windows, chairs and other debris.

Ten years after David Packard's death in 1996, the story of the Macon continues to generate interest. On Sept. 17, 2006, Stanford engineers joined Grech aboard the MBARI research vessel Western Flyer to conduct the first detailed archeological survey of the crash site off Point Sur, Calif. The five-day expedition was a collaboration of 10 institutions and agencies, including the Monterey Bay National Marine Sanctuary, the National Oceanic and Atmospheric Administration's Office of Exploration and the U.S. Navy.

The cruise was led by Grech and Stanford robotics expert Stephen Rock, professor of aeronautics and astronautics. ''We've had a whole series of projects over the years working with MBARI,'' said Rock, director of the Stanford Aerospace Robotics Laboratory. ''This one was spawned several years ago thinking about how to do visual mosaicking-stitching together small, high-resolution snapshots of the sea floor to produce a larger composite image.''

The snapshots would be taken by a camera embedded in a deep-diving ROV-an unmanned vehicle remotely controlled by a pilot aboard the Western Flyer. Each photo would cover only a 20-square-foot section of the crash site. To get a complete mosaic of the entire wreckage, every photo would have to precisely overlap with its neighbors-a daunting task given that the crash site is spread over 75,000 square feet of the ocean floor.

''Getting a vehicle to fly a very straight line that overlaps with the previous straight line is the challenge,'' Rock explained. ''The normal mode of operation for an ROV is to have the pilot remotely control the vehicle with joysticks. MBARI pilots are unbelievable in what they can make these vehicles do. But if you ask them to fly for hours in a precise back-and-forth lawnmower pattern, they're not going to enjoy themselves.''

To solve the problem, Rock and engineering graduate student Kristof Richmond developed new software that allows the ROV to automatically make regular passes over the seafloor-a technique called ''mowing the lawn''-with relatively little pilot input. ''What's unique is that we do it in real time, so the images appear on our screen as we are driving the ROV,'' Rock said. ''That way we can tell if we have complete coverage while we're capturing the photos.''

Collecting some 14,000 photos to produce a rough mosaic of both debris fields, Rock and the MBARI team completed their mission in September. Over the next few months, these images will be combined and color corrected by a computer to create a detailed map of the wreckage.

Aeronautics at Stanford had come full circle in 70 years, from the zeppelin era of William F. Durand to modern deep-sea robotics and imaging.

''It was a thrill to be out on this mission, because it combined everything that's fun: advanced engineering, archeological exploration and history,'' said Rock, whose lab is in the Durand Building at Stanford. ''The Macon was an amazing idea, an amazing craft. I would have loved to have seen it in action.''