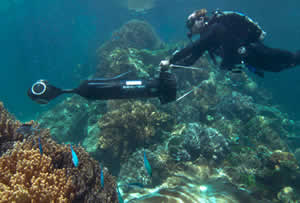 “The visual nature of the project will also help bridge the gap between scientific knowledge and public awareness,” Professor Hoegh-Guldberg

A pioneering scientific expedition that will document the health of coral on the Great Barrier Reef will be undertaken as a joint venture between global technology giant Google, the UQ Global Change Institute, not-for-profit organization Underwater Earth and insurance company Catlin.

The Catlin Seaview Survey, announced in Singapore today, aims to carry out the first comprehensive study of the composition and health of Reef coral to an unprecedented depth range (0-100m).

The project's chief scientist, Professor Ove Hoegh Guldberg from the Global Change Institute at The University of Queensland, said the scientific data gathered would strengthen the understanding about how climate change and other environmental changes are likely to affect ocean ecosystems like the Great Barrier Reef.

"The visual nature of the project will also help bridge the gap between scientific knowledge and public awareness," Professor Hoegh-Guldberg said.

"The Catlin Seaview Survey comprises a series of studies which will reveal to the public one of the last frontiers on Earth: the oceans.

"For the first time in history, we have the technology to broadcast the findings and expedition through Google. Millions of people will be able to experience the life, the science and the magic that exists under the surface of our oceans. This project is very exciting."

Professor Hoegh-Guldberg said the survey was not just another scientific expedition; it aimed to capture the public's imagination and engage people with the science like never before.

The Catlin Seaview Survey camera, developed specifically for the expedition, will capture thousands of 360-degree underwater panoramas. When stitched together, these will allow people to choose a location, dip underwater and go for a virtual dive at all of the locations visited by the expedition.

Google is collaborating with the Catlin Seaview Survey and is working on a new feature on Panoramio (which links photos to locations), so that the 360-degree panorama images can be uploaded and made available to millions of people worldwide.

This will eventually mean that roughly 50,000 panoramas from the Survey will be accessible on Catlin Seaview Survey in partnership with Google Earth and Google Maps.

The project also will have a dedicated YouTube channel and the ability to broadcast Hangouts on air, which allows people to watch livestreams of the expedition team from the ocean floor.

The Catlin Seaview Survey will include a shallow reef survey, a deep reef survey and a megafauna survey, which combined will provide a baseline assessment of the composition, biodiversity and wellbeing of the Reef. The expedition will launch on the Great Barrier Reef in September 2012.

"We are sponsoring the Catlin Seaview Survey so that experts obtain objective scientific data they require to make more reliable conclusions about the impact of climate and environmental changes on our oceans and our planet as a whole. The results will be broadcast on a scale never attempted before, so it is an exciting time for science. We're proud to be part of the team leading this pioneering project."

"As an insurer, Catlin offers our clients protection against many types of risks, so it is natural that we should lead the way in sponsoring research to discover the risks of tomorrow."

The Survey will also draw on the experience of some of the world's leading authorities on oceanography and climate change, with Professor Ove Hoegh-Guldberg (Director of the Global Change Institute at The University of Queensland) as Chief Scientist. Emmy award-winning cinematographer and shark researcher Richard Fitzpatrick will also be part of the Seaview team and will lead the mega-fauna survey.

The Catlin Seaview Survey is sponsored by Catlin Group Limited. The global insurance and reinsurance company is committed to sponsoring scientific research into environment change. From 2009 through 2011, Catlin sponsored the Catlin Arctic Survey, which allowed researchers to collect scientific data about the changing environment in one of the most inhospitable regions of the earth. www.catlinarcticsurvey.com/