Industry Group: Dr. Oz Gets It Wrong On Fish And Mercury; 'A Chaotic Bazaar Of Advice'

Lake-Bed Trails Tell Ancient Fish Story; 'The One That Got Away 50 Million Years Ago' 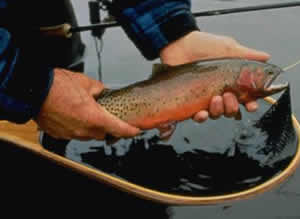 A new study has shown that biologists are restocking the wrong subspecies of trout into small streams and lakes in the Colorado. Credit: CDW

BOULDER, Colorado -- A new study led by the University of Colorado at Boulder indicates biologists trying to save Colorado's native greenback cutthroat trout from extinction over the past several decades through hatchery propagation and restocking efforts have, in most cases, inadvertently restored the wrong fish.

According to a sophisticated DNA analysis, five of nine "relic" populations of what biologists believed to be greenback cutthroat trout living in isolated pockets of the state actually are Colorado River cutthroat trout, a closely related subspecies, said lead author Jessica Metcalf, a researcher in CU-Boulder's ecology and evolutionary biology department. Eggs and sperm from the trout populations have been used for the last several decades to rear new generations in hatcheries, allowing state biologists to restock parts of Colorado with what they thought were greenback cutthroats, she said.

The new study, which included sequencing and analyzing mitochondrial and nuclear DNA, showed the majority of the greenback populations had been misidentified, and that the greenback cutthroat trout range is now restricted to just 11 miles of streams in several remote areas of Colorado. The paper was published in the Aug. 28 online edition of the journal Molecular Ecology.

The misidentification likely was caused by the stocking of fish in the late 1800s and early 1900s when railroads delivered hundreds of thousands of baby trout around the state of various species and subspecies for people to stock in local waters, said Metcalf. "This illustrates the need for biologists to consider that the species may have been introduced by the industriousness of humans before the documentation of the native flora and fauna of the area was recorded," she said.

Although greenback cutthroats were declared extinct in 1937 -- victims of mining pollution, fishing pressure and competition from other trout species -- several small populations were discovered in tributaries to the Arkansas River and South Platte River drainages in the 1950s, she said. Greenback cutthroats were added to the federal list of endangered species in 1978.

State and federal fish managers began taking eggs and sperm from what were believed to be surviving populations of pure greenback cutthroats in the 1970s, rearing them in hatcheries and returning them to native cutthroat habitat. The habitat -- small streams and lakes -- had been cleared of non-native fish species to heighten survivability of the greenbacks, said Metcalf.

"We have to remember that management decisions by federal and state fisheries biologists over the past decades were based on the best reports available by experts at the time," said Metcalf, who received her doctorate from CU-Boulder in ecology and evolutionary biology under Martin in August. "Fortunately, the data is becoming more accurate over time as genetic techniques improve and the peer review process is increasingly incorporated into scientific management strategies."

The Colorado Division of Wildlife reached its goal of 20 self-sustaining populations in 2006, positioning the greenback for removal from the list of federally protected species. "But the new study means that we have not reached the targeted management goals, and the species is no closer to being removed from the endangered species list than when it originally was listed," Martin said.

"Our results suggest greenback cutthroat trout within its native range is at a higher risk of extinction than ever before despite conservation activities spanning more than two decades," the authors wrote in Molecular Ecology.

"This is an incredibly sobering story, and it's not something we wanted to find," said Martin, the principal investigator on the research effort. "While some of us are worried these findings will give the greenback restoration program a black eye, we hope biologists and agencies have the will and resolve to take the necessary steps to recover this species before it is gone forever."

Four native species of cutthroat evolved in Colorado, including the greenback cutthroat, the Colorado River cutthroat, the Rio Grande Cutthroat in the San Luis Valley and the yellowfin cutthroat, historically found in the Twin Lakes region near Leadville in the Arkansas River drainage and now believed to be extinct.