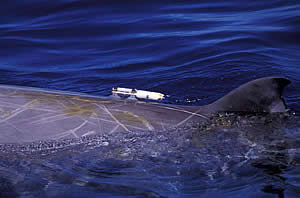 WHOI's Peter Tyack and other scientists kept track of some of the beaked whales like this by means of a Dtag. Photo by Todd Pusser

WOODS HOLE, Massachusetts -- Scientists have long been aware of a link between naval sonar exercises and unusual mass strandings of beaked whales. Evidence of such a link triggered a series of lawsuits in which environmental groups sued the U.S. Navy to limit sonar exercises to reduce risk to whales. In 2008, this conflict rose to the level of the US Supreme Court which had to balance potential threat to whales from sonar against the military risk posed by naval forces inadequately trained to use sonar to detect enemy submarines. The court ruled that the Navy could continue training, but that it was essential for the Navy to develop better methods to protect the whales.

The knowledge most critical to protecting these whales from risk of sonar involves measuring the threshold between safe and risky exposure levels, but until now it has not been known how beaked whales respond to sonar, much less the levels that pose a problem. "We know so little about beaked whales because they prefer deep waters far offshore, where they can dive on one breath of air to depths of over a mile for up to an hour and a half," said Peter Tyack, a senior scientist at Woods Hole Oceanographic Institution (WHOI).

Now, an international team of researchers reports in a paper led by Tyack the first data on how beaked whales respond to naval sonar exercises. Their results suggest that sonar indeed affects the behavior and movement of whales.

Tyack and his colleagues used two complementary methods to investigate behavioral responses of beaked whales to sonar: "an opportunistic approach that monitored whale responses to multi-day naval exercises involving tactical mid-frequency sonars, and an experimental approach using playbacks of simulated sonar and control sounds to whales tagged with a device that records sound, movement, and orientation," the researchers report in the current issue of the journal PLOS (Public Library of Science) ONE

That research team developed experiments to slowly increase the level of sonar at a tagged whale, to stop exposure as soon as the whale started responding, to measure that exposure, and to define the response. The experimental approach used tags to measure acoustic exposure and behavioral reactions of beaked whales to one controlled exposure each of simulated military sonar, killer whale calls, and band-limited noise.

"These experiments were very difficult to develop, and it was a major breakthrough simply to be able to develop a study that could safely study these responses," Tyack said. "All three times that tagged beaked whales were exposed experimentally to playback of sounds when they were foraging at depth, they stopped foraging prematurely and made unusually long and slow ascents to the surface, moving away from the sound.

Beaked whales use their own biosonar to find prey when they are foraging; this means that one can monitor cessation of foraging by listening for when they stop clicking. Once the researchers found that beaked whales responded to sonar by ceasing clicking, they were able to monitor reactions of beaked whales during actual sonar exercises on the range. The research was conducted on a naval testing range where an array of underwater microphones, or hydrophones, covered the seafloor, allowing whale sounds to be monitored over 600 square miles. "During actual sonar exercises, beaked whales were primarily detected near the periphery of the range, on average 16 km away from the sonar transmissions. Once the exercise stopped, beaked whales gradually filled in the center of the range over 2-3 days," they report.

A satellite tagged whale moved outside the range during an exercise, returning over 2-3 days post-exercise. "The combined results indicate similar disruption of foraging behavior and avoidance by beaked whales in the two different contexts, at exposures well below those used by regulators to define disturbance," the scientists report.

"This suggests that beaked whales are particularly sensitive to sound. Their behavior tended to be disrupted at exposure levels around 140 decibels (dB), so they may require a lower threshold than many current regulations that anticipate disruption of behavior around 160 dB, " said Tyack. "But the observations on the naval range suggest that while sonar can disrupt the behavior of the whales, appropriate monitoring and management can reduce the risk of stranding."