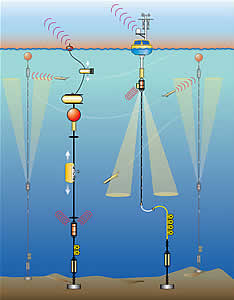 As part of OOI, a global mooring array to collect continuous data will be built. Credit: Jack Cook, WHOI

WASHINGTON, D.C. -- Giving scientists never-before-seen views of the world's oceans, the National Science Foundation (NSF) and the Consortium for Ocean Leadership (COL) have signed a Cooperative Agreement that supports the construction and initial operation of the Ocean Observatories Initiative (OOI).

OOI will provide a network of undersea sensors for observing complex ocean processes such as climate variability, ocean circulation, and ocean acidification at several coastal, open-ocean and seafloor locations.

Continuous data flow from hundreds of OOI sensors will be integrated by a sophisticated computing network, and will be openly available to scientists, policy makers, students and the public.

"Through the Recovery Act, we are putting people to work today to find answers to some of the major scientific and environmental challenges that we face," said Arden L. Bement, Jr., director of NSF.

"The oceans drive an incredible range of natural phenomena, including our climate, and directly impact society in myriad ways," Bement explained. "New approaches are crucial to our understanding of changes now happening in the world's oceans. OOI will install the latest technologies where they can best serve scientists, policymakers and the public."

Added Julie Morris, NSF division director for ocean sciences, "Moving a large project to the construction phase requires rigorous planning. Remarkable cooperation and commitment from the OOI team is translating a long-held dream into a new reality for the ocean sciences research community."

Advanced ocean research and sensor tools are a significant improvement over past techniques. Remotely operated and autonomous vehicles go deeper and perform longer than submarines. Underwater samplers do in minutes what once took hours in a lab. Telecommunications cables link experiments directly to office computers on land. At sea, satellite uplinks shuttle buoy data at increasing speeds.

Sited in critical areas of the open and coastal ocean, OOI will radically change the rate and scale of ocean data collection. The networked observatory will focus on global, regional and coastal science questions. It will also provide platforms to support new kinds of instruments and autonomous vehicles.

"OOI is an unprecedented opportunity for, and whole new approach to, advancing our understanding of how the ocean works and interacts with the atmosphere and solid Earth," said Robert Gagosian, president and CEO of COL. "It will allow scientists to answer complex questions--questions only dreamed of a few years ago--about the future health of our planet, such as the ocean's role in climate change. It's very exciting to be part of this huge step forward in the ocean sciences."

The five-plus-year construction phase, funded initially with American Recovery and Reinvestment Act (ARRA) of 2009 funds, will begin this month.

The first year of funding under the Cooperative Agreement will support a range of construction efforts, including production engineering and prototyping of key coastal and open-ocean components (moorings, buoys, sensors), award of the primary seafloor cable contract, completion of a shore station for power and data, and software development for sensor interfaces to the network.

Subsequent years of funding will support the completion of coastal, deep-ocean, and seafloor systems, with initial data flow scheduled for early 2013 and final commissioning of the full system in 2015.

The OOI is managed and coordinated by the OOI Project Office at the Consortium for Ocean Leadership in Washington, D.C., with three major implementing organizations responsible for the construction of the components of the full network:

In 2010 the program will add an education and public engagement team as the fourth implementing organization; it will take advantage of the technology and combined science and education vision of the OOI.

"This award represents the fulfillment of more than a decade of planning and hard work by hundreds of ocean scientists, and reflects the commitment of the National Science Foundation to new approaches for documenting ocean processes," said Tim Cowles, OOI program director at the Consortium for Ocean Leadership.

"The OOI project team is excited to play a role in implementing this unique suite of observing assets. We're building an infrastructure that will transform ocean sciences."