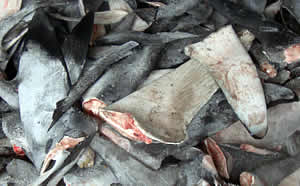 “The global shark fin trade is driving the oceans to collapse,” said Courtney Sakai, senior campaign director at Oceana. “Trade measures are the most direct way to ensure that the powerful economic incentives to catch sharks do not lead to their extinction.”

Representatives from 175 countries are meeting in Doha, Qatar, this month (March 13-25) for the Convention on International Trade in Endangered Species’ (CITES) 15th Conference of the Parties. During these two weeks, the countries will decide on the inclusion of eight shark species (oceanic whitetip, dusky, sandbar, spurdog, porbeagle and scalloped, smooth and great hammerheads) in CITES Appendix II. An Appendix II listing would require the use of export permits to ensure that the species were caught by a legal and sustainably managed fishery.

“The appetite for shark fin soup from a few countries is demolishing shark populations worldwide,” said Sakai. “Countries should approve the CITES proposals to ensure that the international trade of sharks is managed responsibly. A number of the largest shark fin exporters already support the CITES proposals.”

According to studies of the shark fin market, up to 73 million sharks are killed each year, primarily for their fins. Shark fin soup, a part of traditional Chinese culture, is one of the world’s most expensive food products. Today, a bowl of shark fin soup can cost $100USD, with a single fin being worth more than $1,300USD. Once a rarity only available to the upper class, shark fin soup is now commonly available as a result of improved fishing techniques and the increased demand of a larger and wealthier middle class.

Sharks play a vital role in maintaining the health of the marine ecosystem. Sharks are particularly vulnerable to overexploitation because they mature late in life, have very few offspring and live long lives. For example, recent data suggests that the North Atlantic population of oceanic whitetips declined by an estimated 70 percent in the 1990s and scalloped hammerheads by 83 percent in the Northwest Atlantic since the 1980s.

According to the United Nations Food and Agriculture Organization (FAO), a total of approximately 527,000 metric tons of sharks were caught in 2007. However, shark fisheries are largely unmanaged and this figure does not include illegal, unregulated and unreported fishing, which means that the catch is likely up to four times higher. The demand for shark fins often leads to “shark finning,” the cruel and wasteful practice where the fins of a shark are cut off and the remainder of the animal is thrown back into the water.

Oceana supports the inclusion of all eight shark species in CITES Appendix II and is currently in Doha, urging others to do the same. To read Oceana’s new report about how the international trade of shark fins is threatening populations worldwide, please click on the link below.