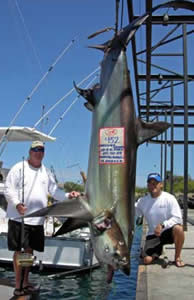 That this massive creature was taken by an angler using stand-up gear rather than a fighting chair made the catch off Kona, Hawaii 11 days ago all the more monumental.

"No one has ever caught and weighed a bigger thresher in the world, let alone doing it on stand-up," said Tim Robertson, a captain that operates a charter boat out of Melton Tackle in Kona. "Everyone likes to say you can't catch big fish on stand up. Yes you can."

The angler, John Patterson of San Clemente, proved that. By doing so, he took away a sense of accomplishment but not a world record.

"The world record, I don't care about that stuff," Patterson said. "That's just your name in a book that nobody reads."

Actually, it probably meant more to Robertson and fellow captain Bill Rhee, who have been trying to establish a recreational fishery for thresher sharks off Kona for two years and thought they could catch a world record.

In March, they caught and released 11 threshers in six night-time trips, and eight were an estimated 500 pounds-plus. They were all probably bigger, considering they underestimated Patterson's fish at 650 pounds.

They can't boast of a world record, but they can say they produced a Hawaiian record since its rules are less stringent. The previous record was 829 pounds.

Patterson, whose boat Marlin Magic II is in Kona, usually pursues blue marlin, but since that bite was slow, he agreed to take Robertson and Rhee and target swordfish and threshers by drifting at night.

Marlin Parker and Jason Holtz joined them. All are tournament anglers well versed in IGFA rules.

At dawn, Rhee finally caught and released a 200-pound thresher. Two other hookups were lost.

As Holtz started clearing the lines to get ready for trolling, one rod got bit. He asked what to do, essentially asking whether to follow IGFA rules. He was told to put it into free spool to see if the fish would eat the bait.

It did and Holtz set the hook and handed it off to Patterson, not thinking it was a world-record thresher. Patterson handed the rod off again to get into his fighting harness.

For 2Â½ hours, Patterson reeled up the fish only to have it swim back down. They thought it was a swordfish.

"This fish is coming up pretty readily, then the fish stops again," Patterson said. "This time the run is faster, deeper and harder than any run it's made."

Patterson knew they weren't IGFA compliant so he asked Rhee if he wanted to finish off the battle. He did.

"The fish never made another run," Patterson said.

The fight was already over. Rhee was left with reeling in 1,000 yards of line and a docile shark that was easily subdued.