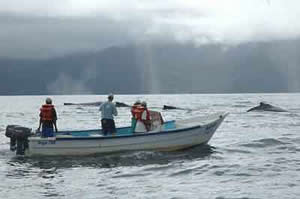 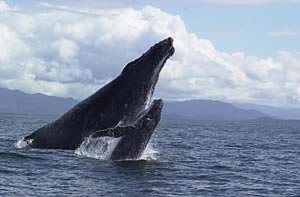 BRONX, New York -- After 15 years of research in the waters of the South Atlantic and Indian Oceans, scientists from the Wildlife Conservation Society, the American Museum of Natural History, and an international coalition of organizations have unveiled the largest genetic study of humpback whale populations ever conducted in the Southern Hemisphere.

By analyzing DNA samples from more than 1,500 whales, researchers can now peer into the population dynamics and relatedness of Southern Hemisphere humpback whales as never before, and help inform management decisions in the sometimes politically charged realm of whale conservation.

"Humpback whales are perhaps the most studied species of great whale in the Northern Hemisphere, but many of the interactions among Southern Hemisphere populations are still poorly understood," said Dr. Howard Rosenbaum, Director of the Wildlife Conservation Society's Ocean Giants Program and lead author of the study. "This research illustrates the vast potential of genetic analyses to uncover the mysteries of how humpbacks travel and form populations in the southern ocean basins."

The scientists collected samples from living whales with biopsy darts fired from crossbows. The darts harmlessly bounce off the marine mammals as they surface to breathe. Samples came also from skin which is continually sloughed off by the animals and collected by the research teams.

Once collected, the samples were brought to the lab at the AMNH Sackler Institute for Comparative Genomics and examined through a technique called polymerase chain reaction (PCR), which "amplifies" specific regions of DNA which then can be used to statistically inform researchers about gene flow between populations. The research team specifically focused on mitochondrial DNA, which is passed through maternal lines of a population, in order to measure interchange between groups.

The findings so far have revealed:

In addition to examining the population boundaries of humpbacks in the Southern Hemisphere, the study also gives scientists some insight into the mysterious and mercurial nature of marine ecosystems, with currents, water depth, and other unseen factors serving as shifting conduits and barriers between marine populations and ecosystems.

On an interesting historical note, Rosenbaum and his co-authors used old whaling records to guide their research on whale populations. One set of charts—titled "The Distribution of Certain Whales as Shown by Logbook Records from American Whale Ships"—was compiled by Charles Townsend of the New York Zoological Society (now WCS) and recorded the locations of more than 50,000 whale captures (including humpback whales) between 1761-1920. According to the charts, many humpback whales were captured in the Gulf of Guinea, Southeastern African and northeastern Madagascar, the same locations where humpbacks congregate today. "Townsend was attempting to identify distribution and possible boundaries between whale populations or 'breeding stocks,'" noted Rosenbaum. "We're still trying to answer the same question with molecular technology in concert with whaling logbook records."

"Understanding the needs of humpbacks and other whale species can be challenging in terms of direct observations of these animals in the wild. Molecular technology gives us a window into the lives of whales that can help us understand the ecological forces shaping their movements and distribution," added Rosenbaum. "We can also use our findings to inform management decisions for a species that is only now beginning to recover from centuries of commercial whaling."

The humpback whale is a baleen whale that grows up to approximately 50 feet in length. The species has distinctively long pectoral fins and a head with knobs on the top and lower jaw. The humpback is also known for its acrobatics (such as full body breaching) and haunting songs, typically sung by males and possibly a mating behavior. The slow-swimming species was hunted commercially until the International Whaling Commission protected the species globally in 1966. Current estimates for humpback whale numbers are widely debated. While they are recovering, total population sizes may only perhaps be a small percent of the original global population.