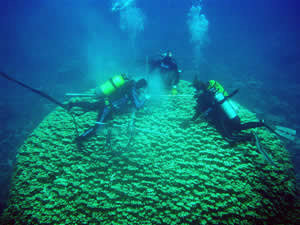 In 2005, Professor Rob Dunbar and his colleagues collected core samples from a large coral colony near Easter Island, similar to the Kenya study 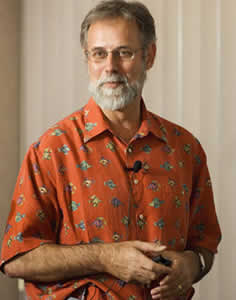 Robert Dunbar and his colleagues used coral samples from the Indian Ocean to create a 300-year record of soil erosion in Kenya.

STANFORD, California -- Coral reefs, like tree rings, are natural archives of climate change. But oceanic corals also provide a faithful account of how people make use of land through history, says Robert B. Dunbar of Stanford University.

In a study published in the Feb. 22 issue of Geophysical Research Letters, Dunbar and his colleagues used coral samples from the Indian Ocean to create a 300-year record of soil erosion in Kenya, the longest land-use archive ever obtained in corals. A chemical analysis of the corals revealed that Kenya has been losing valuable topsoil since the early 1900s, when British settlers began farming the region.

"We found that soil erosion in Kenya increased dramatically after World War I, coinciding with British colonialism and a series of large-scale agricultural experiments that provoked a dramatic change in human use of the landscape," said Dunbar, a professor of geological and environmental sciences. "Today, the Kenyan landscape continues to lose topsoil to the Indian Ocean, primarily because of human pressure."

Erosion is a serious threat, he noted, because the loss of fertile soil often is accompanied by a decrease in food production. According to one recent study, soil erosion is a global problem that has caused widespread damage to agriculture and animal husbandry, placing about 2.6 billion people at risk of famine. "This is particularly worrisome in East and sub-Saharan Africa, where per capita food production has declined for the last half-century," Dunbar said.

For the study, Dunbar and his colleagues donned scuba gear and dove to the Malindi coral reef near the mouth of the Sabaki River, the second longest river in Kenya. Draining about 11 percent of Kenya's landmass, the Sabaki transports sediments to the sea.

The researchers took core samples from two large coral colonies, each more than 12 feet tall and about 15 feet wide. To find out how sediment flux has varied over the years, Dunbar's team measured the ratio of two elements—barium and calcium—in the coral skeleton, which is composed of calcium carbonate. "It turns out that there is a lot of barium in soils," Dunbar said. "So whenever something changes the landscape and causes the soil to erode and wash into the rivers, the soil is delivered to the sea. And with that soil comes the barium."

The corals then incorporate the barium in well-developed bands that provide a record of annual growth, similar to tree rings, he added. To measure barium levels in the corals, Dunbar's team applied an innovative technique that quickly vaporizes the carbonate, then analyzes its chemical composition with a mass spectrometer.

"In the past we used a dentist drill," Dunbar said. "We drilled out a little bit of powder, and then we dissolved the powder and took it to the lab, where we measured the barium with a wet chemical technique. It was a very slow process, very painful. It took forever to get data." The new method, developed by researchers at the Australian National University, "increased the speed at which we could collect data by a factor of 50," he noted.

An analysis of barium levels revealed that prior to about 1915, the Kenyan landscape was in equilibrium—rain washed out some soils moderately from decade to decade in a regular cycle that was only altered by periods of drought. "But in the late 1910s, the amount of barium coming down to the coast suddenly shoots up, and it keeps rising and rising," Dunbar said. "This represents colonial land change, when the British came in and tried some grand-scale experiments, like the clearing of bush to create coffee plantations."

Before the plantations were developed, the primary long-term land uses in the region were nomadic animal husbandry and small-scale agriculture—sustainable practices that were compatible with the natural vegetation, Dunbar said. But then the colonialists began clear-cutting some of the coastal forests and burning vegetation to make room for the plantation experiments. What followed was a drastic increase in soil erosion that turned the rivers muddy and brown. "It's a natural thing," Dunbar explained. "When you perturb a landscape and you cut down trees and bushes—the plants that normally help hold the soils together—the next time you have a big rain or a flood, the soils go to the rivers."

Although colonialism ended decades ago and plantations along the coast were abandoned, the landscape remains out of equilibrium, he said: "This would be a lesson for other parts of the planet: When you perturb a system by clear-cutting the natural vegetation and it responds in a negative way, it loses its essence, and it responds not just for a few years or a few decades but maybe a century or even more." Population pressure

Another factor driving soil erosion in Kenya is human pressure. As the population grows, more trees are harvested for fuel, which contributes to erosion, Dunbar said.

"Furthermore, a dramatic increase in population following independence [in 1963] together with unregulated land use, deforestation and severe droughts in the early 1970s all contributed to an unprecedented rate of soil erosion and flux of suspended sediment [and barium] to Malindi reef between 1974 and 1980," the authors wrote. Erosion remains a serious problem today, they added, thanks in part to continued urban sprawl, deforestation, poor farming practices and other human activities.

The authors called for stronger soil conservation efforts—a goal that Kenya is unlikely to achieve on its own because of a lack of economic resources, they noted. However, if soil devastation continues, the socioeconomic consequences could be dire, Dunbar said. "Loss of soils constitutes loss of valuable natural capital for the people of East Africa," he noted. "A follow-on effect is that loss of the soils down the rivers can also have a damaging effect of the coastal zone, particularly the health of local fisheries and the corals reefs that drive a local tourist economy."

The Dunbar lab's next research effort will focus on mega-droughts—periods of severely reduced rainfall that lasted for decades in East Africa. The most recent mega-drought occurred between 1750 and 1820. "If you think how many people live in East Africa now, if a mega-drought happened today, it would be devastating," Dunbar said.