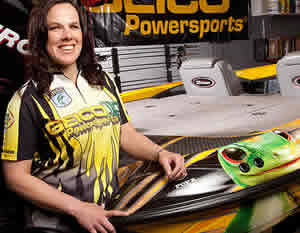 CHARLOTTE, North Carolina -- Blustery winds blew across Lake Norman throughout the opening day of the Bass Pro Shops Bassmaster Southern Open Thursday, but GEICO angler Christiana Bradley held her own as the only female in a field of 174 professionals.

Bradley caught her legal limit of five bass and weighed in at Blythe Landing with a conservative 6 pounds, 7 ounces to finish the day 121st on the leaderboard.

"I actually caught eight fish today but only five big enough to keep, so those were the five I brought to the scales," Bradley said. "It was tough out there. The wind blew 30 mph all day, which impacted the fishing quite a bit. It was tough on everybody, and I just never found the fish that were biting."

Coupled with her practice time on Lake Norman, Bradley feels like she's getting in tune with the fishing conditions and has formulated what she hopes is a better plan of attack for Friday's action, although she knows she needs to be ready for anything.

"I've got a plan for tomorrow, but it's going to depend on the bite in the morning," said Bradley, a systems engineer at GEICO when she's not competing against the top anglers in the world. "Tomorrow, the morning temperature is supposed to be 37 degrees and it's been in the mid-50s here in the morning all week. A change like that is going to impact the fish to some degree, I just don't know how much until I'm out there.

"I'll just have to adjust throughout the day. I feel like I'll be able to catch five fish fairly early -- I caught four of my five today by 10 a.m. If I can do that again tomorrow, then that will allow me to go to deeper waters to try and catch bigger fish. Hopefully the fish in the deeper areas won't be impacted by the temperature changes as much."

Boats launch at 7 a.m., Friday, from Blythe Landing Marina and Bradley knows she will have to climb into the elite top 12 if she hopes to fish on Saturday. All action can be tracked on < href="http://www.bassmaster.com" target="_blank">bassmaster.com.