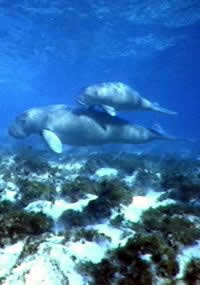 QUEENSLAND, Australia -- High cadmium levels in dugongs and turtles in Australia's north may be affecting the kidneys of Torres Strait Islanders who eat these animals as delicacies, preliminary research suggests.

But until the team has more data, Haswell-Elkins is recommending Torres Strait Islanders keep eating these traditional foods.

She says earlier studies have found that the cadmium comes from natural sources in the ocean, rather than industrial pollution, and concentrates in the liver and kidneys of dugongs and turtles.

This may be an issue, she says, as there is some suggestion that the kidneys of people with diabetes are more sensitive to being damaged by cadmium.

So her team investigated the possible impact of the cadmium from traditional seafoods on 122 Torres Strait Islanders, Indigenous Australians who are already at risk from kidney damage due to diabetes.

The researchers found that people who eat more dugong and turtle have more cadmium in their urine and also worse albuminuria, a marker of kidney damage in which high levels of the protein albumin are excreted in the urine.

The researchers think that cadmium in traditional foods could be contributing to diabetes-related kidney damage.

And they think health researchers should pay more attention to cadmium as one of the many factors that can affect kidney health.

But Haswell-Elkins says it's too early to say whether the cadmium is causing the kidney damage or whether already-damaged kidneys are simply allowing more cadmium to escape in the urine.

She says people should not be afraid of eating their traditional foods.

Until we understand how significant this source of cadmium is, she says, it is best to be more concerned about the well-established risk factors for diabetes such as hypertension, lack of exercise, poor diet, alcohol, obesity and smoking.