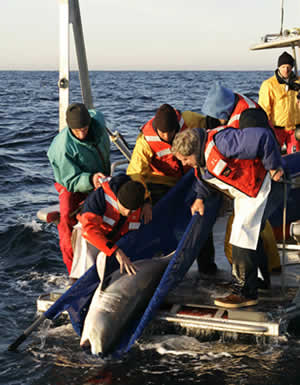 A young male white shark on exhibit at the Monterey Bay Aquarium since September was tagged and returned to the wild shortly after sunrise today (Tuesday, January 16). It marks the second time in two years that the aquarium has exhibited a white shark and then returned it to the wild.

It is the only aquarium ever to exhibit the ocean's top predator for more than 16 days.

Aquarium staff released the shark from a boat in Monterey Bay after attaching an electronic data tag that will track its movements for the next 90 days. Information documenting where the shark traveled, how deep it dove and the water temperatures it favored will be relayed to scientists via satellite when the tag pops free in mid-April. The tag data will be posted to the Tagging of Pacific Pelagics web site, www.toppcensus.org.

The shark had grown from an initial length of 5-foot-8 and 103 pounds when it arrived on August 31, 2006 to its current size of 6-foot-5 and 171 pounds. The shark was healthy and feeding at the time of release, but had grown large enough that to delay the release much longer would have posed more logistical challenges, and potentially more risks to human safety, during the move from the exhibit to Monterey Bay, said Randy Hamilton vice president of husbandry for the aquarium.

"We'd always planned to release him when the time was right, and this was the time," Hamilton said. "He's in good health, we've learned some new things about caring for white sharks and he was still small enough to move. We expect he'll do well after release, just as our first shark did."

The shark had shown no interest in the other animals in the Outer Bay exhibit, feeding only on salmon, black cod and albacore offered by aquarium staff members, Hamilton said. It had in recent weeks begun to develop abrasions on its snout ŌĆ" another consideration that factored into the timing of the release, he said.

"The health and well-being of animals in our care is our paramount concern," Hamilton said.

The first shark to do well on exhibit, a female, was at the Monterey Bay Aquarium for 198 days in 2004-2005. The animal released today was eight inches longer and 42 pounds heavier when he arrived. He was on exhibit for 137 days, and was seen by nearly 600,000 people ŌĆ" about 8 percent more visitors than during the same period in 2005, and about 19 percent more than aquarium officials had anticipated.

The first Sunday he was on exhibit ŌĆ" over Labor Day weekend ŌĆ" resulted in an all-time attendance record, with nearly 17,000 people visiting the aquarium.

The unexpected boost in attendance generated by the white shark prompted trustees of the nonprofit aquarium to contribute an additional $200,000 last DecemberŌĆ" for a total of just over $1 million since 2002 ŌĆ" to field studies of juvenile and adult white sharks.

In the fall of 2006 alone, researchers funded in part by the aquarium placed electronic tags on 41 adult white sharks off the Farallon Islands and Point A├▒o Nuevo ŌĆ" the largest number ever tagged in this fashion over such a short period. Researchers with the Tagging of Pacific Pelagics (TOPP) have now tagged 101 adult white sharks off the Central Coast with data-collecting tags.

Data from the tags are offering new insights into the far-ranging travels of white sharks in the eastern Pacific, according to Dr. Barbara Block of Stanford University, a marine biologist and principal investigator with TOPP.

The aquarium also collaborates with research teams to tag young white sharks in Southern California waters. Thus far, researchers have tagged nine young sharks there, and collected DNA samples for analysis of the population structure of white sharks in California and Mexico.

The aquarium will begin its sixth field season of white shark research this summer, and will again attempt to bring a young shark back to Monterey for exhibit.

"We continue to learn what it takes to care for a young white shark," said Associate Curator Manny Ezcurra, who heads the aquarium's white shark exhibit team.

The shark released today was caught by aquarium collectors offshore in Santa Monica Bay on August 17. He spent two weeks in a 4-million-gallon ocean pen off Malibu and was observed feeding in the pen before he was brought to Monterey in a 3,000-gallon life support transport vehicle.

During his time at the aquarium, visitors not only saw the shark ŌĆ" they also learned about white shark conservation issues in conversations with staff and volunteer guides; through a question-and-answer auditorium program devoted to the white shark project; and through new exhibit graphics specifically addressing the threats facing white sharks.

Like the female shark released two years ago, the white shark was "a powerful emissary for ocean conservation," said aquarium Executive Director Julie Packard. Surveys of aquarium visitors who saw the first white shark found many of them reporting that they came away from the experience with a deeper understanding of the need to protect white sharks and their ocean homes.