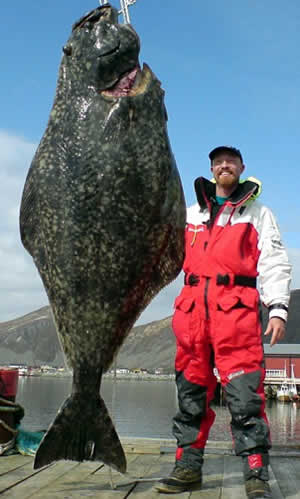 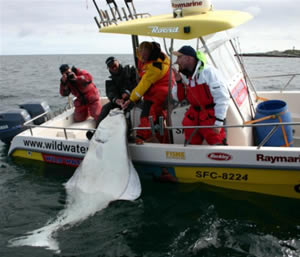 The anglers struggle to pull the mighty beast aboard. credit: WILDWATER.SE

LOFOTEN, Norway -- A halibut thought to be the largest ever line-caught fish has been hooked by an angler in Norway.

The monster catch is believed to have beaten the previous record for a line-caught fish by 24 pounds.

Although halibut of up to 8 foot have been spotted in Norweigian waters, it is unusual for the fish to grow to their maximum size without being caught.

Halibut are the largest flat fish in the ocean, with an average weight of 25 pound to 30 pounds, and can be found in the North Pacific and North Atlantic oceans.

Cato Bekkevold, an expert from the region, said: "The area where he caught it is famed for cod and coalfish, but last year the Wildwater Camps brought up 80 halibut.

"These halibut can be caught by a variety of methods, but drifting with coalfish or big shad-jigs [a type of hook] baited with a worm have caught the majority.

"There have been some monsters caught by commercial fishermen, with one recently off Norway weighing 314.5kg (693 pounds).

"It is painted in full size at the Halibut museum on the island of Senja."