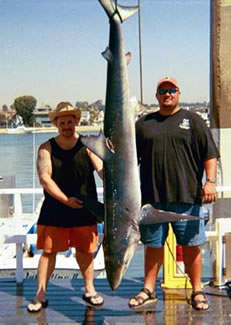 Shane Smith of Irvine, right, stands next to the 164-pound blue shark he caught

BALBOA, California -- Shane Smith of Irvine was fishing for mako sharks Sunday when he hooked up six miles off Catalina Island.

As it turned out, a case of mistaken identity wound up being a potential 164-pound state-record blue shark.

In recent years, blue sharks have been scarce compared to the numbers years ago.

Anglers typically cut them loose when they discovered it is a blue, evidenced by the current state record.

In the late 1990s, the Department of Fish and Game opened a category for blue sharks in the state record book.

DFG spokesman Steve Wertz said it was recognized because the department didn't have a minimum-size qualification. He said it should not have been accepted.

But since then, nobody has submitted anything bigger – until now.

Fishing with a friend, Smith landed the fish at 5:45 p.m. Sunday after a half-hour fight on 80-pound test.

Smith said the fish lost weight when it purged its stomach contents and because of the 18 hours it took for him to finally get the fish weighed.

"I put it in the back of my truck and packed it with ice, trying to preserve its weight as much as I could," he said.

He used 20 bags of 20-pound ice to cover the fish and waited until the Balboa Angling Club in Newport Beach opened at noon Monday to weigh it.

By then, Smith was becoming suspicious of the fish because the tail and teeth didn't look right, but he "was almost positive it wasn't a blue."

But the club weigh-master confirmed it was a blue, as did the DFG later.

"When I put it on the boat, it was getting kind of late," Smith said. "It's unbelievable how different the shark looked. It doesn't look like the same fish. I was thrown off."

Nevertheless, Smith was "stoked" to have a state record, assuming the DFG confirms the record, and there's no reason to think it won't.