Scientist warns of threat to last stronghold of endangered turtle 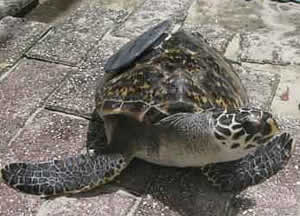 Anita the turtle blows a kiss to researchers helping her rehabilitate. Credit:University of North Carolina Wilmington

WILMINGTON, North Carolina -- An endangered turtle named Anita made history on Dec. 15, when she became one of the only live marine turtles to ever fly in the passenger cabin of an airplane, thanks to a one-time exemption by American Airlines and the dedication of a University of North Carolina Wilmington marine biology professor.

UNC Wilmington professor Alina Szmant was teaching a coral reef ecology course on the Island Territory of Curacao in Feb. 2007, when local teenagers found Anita the turtle struggling to swim in a shallow pool. The Curacao Sea Aquarium staff surmised that the small hawksbill turtle was hit in the head by a boat, suffering nerve damage that prevented her from swimming correctly.

On the advice of UNCW turtle researcher Amanda Southward and North Carolina State University marine veterinarian Craig Harms, Szmant obtained medications needed to treat Anita that were not available in Curacao. The medicines were brought to the island by UNCW researcher Rob Whitehead.

Szmant and her students oversaw the daily care of Anita – feeding her and massaging her crooked neck several times a day for six weeks. When Anita was diagnosed with a hyper-inflated right lung, Szmant outfitted Anita with a small lead plate velcroed to her shell to counter-weight the extra air in her body cavity. This helped her level off as she floated in her tank. Shortly after, Szmant and her students had to return to the U.S.

The staff of the Sea Aquarium kept up Anita's care and she became a favorite with the children's snorkel club. She was eventually able to open her mouth and eat on her own, but her damaged lung and crooked neck did not improve. When Szmant returned to Curacao with a new group of UNCW students in spring 2009, she found that Anita was still seriously impaired and required daily hand feeding. The Sea Aquarium feared they could not care for her much longer, so Szmant began an effort to find Anita the home and help she needed.

Ryan Butts, director of the in Marathon, Fla., Hidden Harbor Marine Environmental Project, referred to as "The Turtle Hospital," offered to take Anita in if Szmant could get her to the U.S. Because Anita is an endangered species of marine turtle, her travel required two export permits – one from Curacao and another from the US Fish and Wildlife Service, which took six months to acquire.

After a tireless effort by Szmant and her colleagues, Anita arrived at her new home on Dec. 15. At the Turtle Hospital, Anita will receive a complete veterinary evaluation and possibly have her lungs surgically repaired. If rehabilitated, the turtle may be released to breed and contribute to the recovery of this endangered species.

American Airlines employees were instrumental in obtaining the special permission needed for Anita to ride in the passenger cabin and providing a complimentary ticket for Szmant to fly the turtle to Miami.