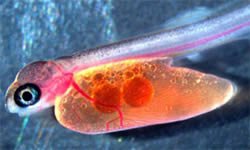 DAVIS, California -- Hatchery-reared steelhead trout show increased growth of some parts of the brain when small stones are scattered on the bottom of their tank, according to a new study by researchers at UC Davis. The brains of those young fish were closer to those of salmon reared in the wild, and the fish also showed behavior closer to wild than to hatchery-reared fish.

"There's an obvious difference between the hatchery and the wild fish," said graduate student Rebecca Kihslinger, who carried out the study with Gabrielle Nevitt, professor of neurobiology, physiology and behavior at UC Davis. "A simple change affected brain growth in a large-scale way."

The results could affect the design of hatcheries for breeding fish to restock wild populations, Kihslinger said. The study is published in the February 2006 issue of the Journal of Experimental Biology.

Wild steelhead lay their eggs in gravel nests on the riverbed. After hatching, the fry, called alevins, stay among the gravel and live off their yolk sac until they emerge as free-swimming fry. In hatcheries, the fish are reared in tanks of clean, well-aerated water, but without environmental features or enrichment.

Earlier work by Nevitt's lab at UC Davis and other labs has shown differences between hatchery-reared and wild fish, Kihslinger said. But most studies have looked at older fish, and have not distinguished between the effects of selective breeding for "domesticated" fish and of the environment in which the fish live.

Kihslinger reared steelhead in regular tanks and in tanks scattered with small stones. She videotaped the fish, and measured the size of their brains after 10 to 12 days, when the fish were emerging as free-swimming fry. She also studied fish reared in natural conditions in rivers.

Fish reared in both sets of tanks had brains of similar size, but the cerebellum, a part of the brain that controls movement and body position, was significantly larger in fish reared with stones. Those fish also moved around less, perhaps using their yolk reserves more efficiently.