Fight Back: War On Lionfish Shows First Promise Of Success; 'Complete Extirpation Is Not Necessary' 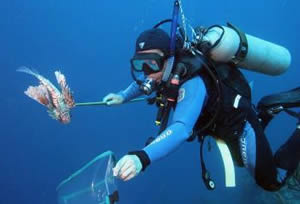 CORVALLIS, Oregon -- It may take a legion of scuba divers armed with nets and spears, but a new study confirms for the first time that controlling lionfish populations in the western Atlantic Ocean can pave the way for a recovery of native fish.

Even if it's one speared fish at a time, it finally appears that there's a way to fight back.

Scientists at Oregon State University, Simon Fraser University and other institutions have shown in both computer models and 18 months of field tests on reefs that reducing lionfish numbers by specified amounts â at the sites they studied, between 75-95 percent â will allow a rapid recovery of native fish biomass in the treatment area, and to some extent may aid larger ecosystem recovery as well.

It's some of the first good news in a struggle that has at times appeared almost hopeless, as this voracious, invasive species has wiped out 95 percent of native fish in some Atlantic locations.

"This is excellent news," said Stephanie Green, a marine ecologist in the College of Science at Oregon State University, and lead author on the report just published in Ecological Applications. "It shows that by creating safe havens, small pockets of reef where lionfish numbers are kept low, we can help native species recover.

"And we don't have to catch every lionfish to do it."

That's good, researchers say, because the rapid spread of lionfish in the Atlantic makes eradication virtually impossible. They've also been found thriving in deep water locations which are difficult to access.

The latest research used ecological modeling to determine what percentage of lionfish would have to be removed at a given location to allow for native fish recovery. At 24 coral reefs near Eleuthera Island in the Bahamas, researchers then removed the necessary amount of lionfish to reach this threshold, and monitored recovery of the ecosystem.

On reefs where lionfish were kept below threshold densities, native prey fish increased by 50-70 percent. It's one of the first studies of its type to demonstrate that reduction of an invasive species below an environmentally damaging threshold, rather than outright eradication, can have comparable benefits.

Some of the fish that recovered, such as Nassau grouper and yellowtail snapper, are critically important to local economies. And larger adults can then spread throughout the reef system â although the amount of system recovery that would take place outside of treated areas is a subject that needs additional research, they said.

Where no intervention was made, native species continued to decline and disappear.

The lionfish invasion in the Atlantic, believed to have begun in the 1980s, now covers an area larger than the entirety of the United States. With venomous spines, no natural predators in the Atlantic Ocean, and aggressive behavior, the lionfish have been shown to eat almost anything smaller than they are â fish, shrimp, crabs and octopus. Lionfish can also withstand starvation for protracted periods â many of their prey species will disappear before they do.

Governments, industry and conservation groups across this region are already trying to cull lionfish from their waters, and encourage their use as a food fish. Some removal efforts have concentrated on popular dive sites.

The scientists said in their report that the model used in this research should work equally well in various types of marine habitat, including mangroves, temperate hard-bottom systems, estuaries and seagrass beds.

A major issue to be considered, however, is where to allocate future removal efforts. Marine reserves, which often allow "no take" of any marine life in an effort to recover fish populations, may need to be the focus of lionfish removal. The traditional, hands-off concept in such areas may succeed only in wiping out native species while allowing the invasive species to grow unchecked.

Keeping lionfish numbers low in areas that are hot spots for juvenile fish, like mangroves and shallow reefs, is also crucial, the report said.

This research was done in collaboration with scientists at Simon Fraser University, the Reef Environmental Education Foundation, and the Cape Eleuthera Institute. It has been supported by the Natural Science and Engineering Research Council of Canada, the Boston Foundation and a David H. Smith Conservation Research Fellowship.

"Many invasions such as lionfish are occurring at a speed and magnitude that outstrips the resources available to contain and eliminate them," the researchers wrote in their conclusion. "Our study is the first to demonstrate that for such invasions, complete extirpation is not necessary to minimize negative ecological changes within priority habitats."