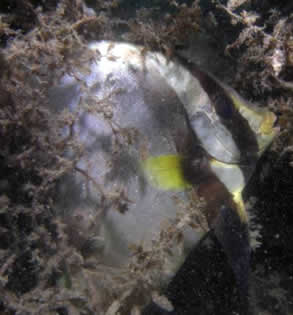 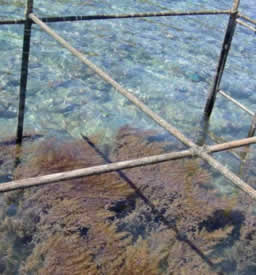 Three years after the cage mesh has been removed, seaweed has taken over the caged areas (Image: James Cook University)

TOWNSVILLE, Australia -- In a study that marks progress in understanding the basis of coral reef recovery, researchers have revealed the critical importance of a rare batfish, Platax pinnatus, in promoting the return to health of a disturbed coral reef overgrown with algae. The findings bring to light a previously unrecognized role for the batfish species, which had not been considered a significant player in reef recovery after overfishing. In doing so, the study provides insight into the poorly understood—and potentially complex—forces that influence the state of coral reefs under ecological stress. The work appears in the December 19th issue of the journal Current Biology, published by Cell Press, and is reported by David Bellwood, Terry Hughes, and Andrew Hoey of the Australian Research Council Centre of Excellence for Coral Reef Studies at James Cook University.

The world’s tropical coral reefs are under threat from overfishing, habitat modification, and global warming. One of the most visible signs of a decline in the condition of coral reefs is the widely documented shift from a healthy state in which corals dominate to a weedy state in which algae (so-called “macro algae") dominate. It has been repeatedly demonstrated that this phase shift can be triggered by a loss of algae-consuming herbivores, especially parrotfishes and surgeonfishes. However, the critical question has remained: How can this coral-algal phase shift be reversed"

By simulating overfishing in large experimental plots on the Great Barrier Reef, the researchers in the new study intentionally triggered a phase shift to algal dominance on a healthy reef. They then filmed the reef’s recovery with remote underwater digital videos cameras. Remarkably, only two of the 27 herbivorous fish species present on the reefs had any significant impact on its recovery from algal overgrowth. What was most surprising was that the dominant browser was a rare batfish, a species previously thought to be an invertebrate feeder. Meanwhile, parrotfishes and surgeonfishes, which are the routine consumers of seaweed on coral reefs, were unable to reverse runaway algal blooms.

The study’s findings highlight the unexpected importance of a single rare species in the recovery of coral reefs, and potentially contribute to the identification and future protection of species groups that underlie the resilience and regenerative capacity of coral reef ecosystems.