All In Sight: Scientists Test Infrared System To Detect Whales; Software Searches For The Whale Spout 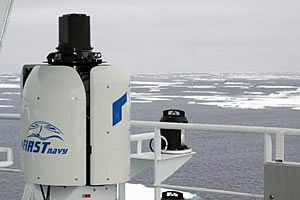 BREMERHAVEN, Germany -- A new measurement system for the detection of whales is used for the first time on board of the research vessel Polarstern. Whales are usually difficult to spot. On the one hand, they spend the greater part of their life under water. On the other hand, only a small part of their body can be seen when they surface, and this can even hardly be distinguished from the surrounding water. Visual sightings by marine mammal observers are therefore usually based on observations of the spout, the condensing and quite warm breathing cloud. It rises, depending on the whale species and wind conditions, between one metre and ten metres over the water surface and remains visible for only a few seconds. A thermal imaging camera specifically optimized for this purpose now uses the heat of this spout. It is employed for the first time during the current expedition of RV Polarstern.

The underlying measurement method, infrared thermography, registers both at day and night the heat radiation originating from each body. It depicts it on a computer screen as a black and white picture, thus making it visible for humans: the brighter a spot, the warmer it is. The warm spout of a whale clearly stands out against the background of the cold North Atlantic or Antarctic waters.

Infrared thermography is already in use with great success, for example to examine the heat insulation of buildings. However, the ship-based detection of whales on sea presents new challenges: the camera must have "all-round visibility", it is subject to the constant movement of the ship and the spout is only briefly visible, possibly at a great distance. This poses high demands on the camera's optics: similar to animal photography, highest resolution telephoto lenses are necessary. When mounted to the ship, however, the camera would, due to the ship's motion, only point into the sky for much of the time.

A new thermal imager developed by Rheinmetall Defence Electronics, Bremen, Germany overcomes these challenges. The system, called FIRST Navy, was installed during Polarstern's last port call on a highly stabilized platform in the ship's crow's nest at a height of about 28 metres. The system generates five thermographic all-round images per second with a resolution of 7200 x 563 pixels of about 4 megapixels each. The stabilization compensates the ship's movements with the effect that the upper edge of the image is always aligned with the horizon and the surrounding water surface does not move out of the picture. The system produces about a terabyte of data each day.

Researchers from the Alfred Wegener Institute for Polar and Marine Research in the Helmholtz Association currently develop software to evaluate this data volume automatically. "We are very happy that the hardware of the system works successfully on board of Polarstern. The software is designed to search the stream of pictures for whale spout", explains Dr. Olaf Boebel, head of the research group Oceanic Acoustics at the Alfred Wegener Institute. He is in charge of the research project MAPS (Marine Mammal Perimeter Surveillance) which runs since early 2009. The aim is to transmit direction and distance of a whale sighting together with the respective video sequences to the ship's command in real-time. Ships equipped with such a system can, for the protection of the whales, respond by evasive manoeuvres or interrupt seismic measurements, as appropriate. Furthermore, the system can directly support research projects concerning whale population in the scarcely researched Antarctic regions. Further application possibilities regarding ship security (evasion of collisions with growlers) and sea ice research (ice coverage at small-scales) are important, not least with regard to the diminishing Arctic ice cover.