Wallet Missing For 36 Years Found Inside Shark; 'I Was Wondering What Else Was In There' 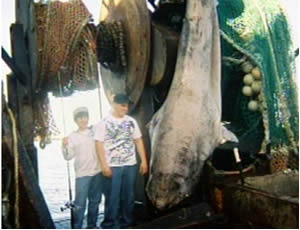 A wallet was found inside a cow shark

MONTEREY, California -- Royal Seafoods has been bringing in the day's catch for generations. Employees at the company said they thought they'd seen it all, until the good ship Irene's Way pulled up the other day.

A huge shark was onboard, and it carried a surprise.

"It was about 2,000 pounds, about 16 feet long, it was humongous," employee Anthony Campo said.

John Pennisi, the ship's captain, said his crew pulled the large shark up out of deep waters off Point Sur.

Pennisi called the large fish a cow shark, and he said it is the biggest shark he's ever seen.

When the crew hoisted up the shark, something strange fell out of it.

"I've seen a lot of sharks and a lot of things, but never a wallet come out of a shark," Pennisi said. "I was wondering what else was in there. He has a pretty big belly."

Along with several seagulls and a few furrier sea creatures, the crew found a wallet that had a date from 1972 inscribed on it.

The mystery of whose wallet was found may go unanswered.

There was no identification inside the wallet, just a few words in both English and Japanese.

Pennisi said he is going to hold on to the wallet as a reminder of the large shark and the catch of the day.