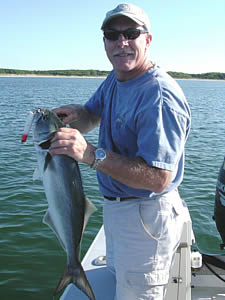 WASHINGTON, D.C. -- NOAA’s Fisheries Service reported to Congress today that four stocks — Atlantic bluefish, Gulf of Mexico king mackerel and two stocks of monkfish in the Atlantic — have been rebuilt to allow for continued sustainable fishing. This is the largest number of stocks to be declared rebuilt in a single year since the fisheries service declared the first stock successfully rebuilt in 2001.

“Rebuilding these four stocks so they can support the highest sustainable harvest for future generations of Americans is a significant milestone,” said Jim Balsiger, acting NOAA assistant administrator for NOAA’s Fisheries Service. “And while we can claim success with these stocks and 10 others we’ve rebuilt since 2001, this year’s report also shows the major challenges we face to end overfishing on other domestic fish stocks in 2010, as we are ordered to do by law.”

Three stocks — thorny skate, Atlantic blacknose shark and Atlantic shortfin mako shark — were added this year to the list of those that are being fished unsustainably. A fourth stock, Gulf of Mexico pink shrimp, was also listed as subject to overfishing but the stock assessment is being reviewed.

“NOAA is working with the eight regional fishery management councils around the nation to end overfishing through annual catch limits and accountability measures,” said Balsiger. “NOAA strongly supports establishing catch share programs that allocate the annual catch to participants in the fishery to give fishermen an economic incentive to conserve fish stocks for the long term.”

Today’s report to Congress, 2008 Status of U.S. Fisheries, is the latest annual update on stocks that are subject to overfishing or stock populations that are overfished — too low to ensure a maximum sustainable yield. Ending overfishing allows the fish population to increase over time if conditions are favorable and the stock responds as predicted.

In the report, NOAA scientists reviewed 199 stocks and stock complexes to determine if they were overfished — a population too low to ensure a maximum sustainable harvest — and found that 153 (77 percent) are not overfished, and 46 (23 percent) are overfished.

NOAA scientists also reviewed 251 stocks or stock complexes to see if they were currently subject to overfishing — currently being fished at a level that would threatened the stocks — and found only 41 (16 percent) are.

Under the Magnuson-Stevens Fishery Conservation and Management Act, NOAA and the regional fishery management councils are required to end overfishing, and prevent future overfishing, through annual catch limits and accountability measures.

Federal fishery management plans must establish annual catch limits and accountability measures by 2010 for stocks subject to overfishing, and by 2011 for all other stocks.

The new report to Congress, 2008 Status of U.S. Fisheries, which gives listings of stocks that are overfished or undergoing overfishing by region, is available online.