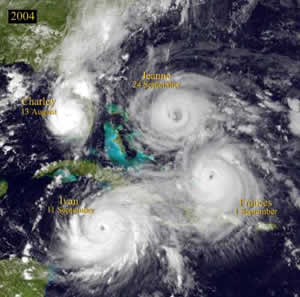 LONDON, England -- The link between changes in the temperature of the sea’s surface and increases in North Atlantic hurricane activity has been quantified for the first time. The research - carried out by scientists at UCL (University College London) and due to be published in Nature on January 31 - shows that a 0.5Â°C increase in sea surface temperature can be associated with a ~40 per cent increase in hurricane activity.

The study, conducted by Professor Mark Saunders and Dr Adam Lea of the Benfield UCL Hazard Research Centre and the UCL Tropical Storm Risk forecasting venture, finds that local sea surface warming was responsible for about 40 per cent of the increase in Atlantic hurricane activity (relative to the 1950-2000 average) between 1996 and 2005.

The research focuses on storms that form in the tropical North Atlantic, Caribbean Sea and Gulf of Mexico – a region which produced nearly 90 per cent of the hurricanes that reached the United States between 1950 and 2005. To quantify the role of sea warming it was necessary to first understand the separate contributions of atmospheric circulation and sea surface temperature to the increase in hurricane frequency and activity.

Professor Saunders, the lead author of the study, explained how this was done. “We created a statistical model based on two environmental variables – local sea surface temperature and an atmospheric wind field - which replicated 75-80 per cent of the variance in tropical Atlantic hurricane activity and frequency between 1965 and 2005. By removing the influence of winds from the model we were able to assess the contribution of sea surface temperature and found that it has a large effect. “