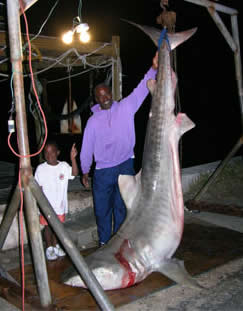 This 10-foot tiger shark weighs about 283 pounds and was caught by avid fishermen, Hayward Thomas

WEST END, Grand Bahama -- Grand Bahama fisherman, Shalton Barr, never thought he would star in his own Jaws movie or at least have a similar encounter.

This 10-foot tiger shark weighs about 283 pounds and was caught by avid fishermen, Hayward Thomas and Shalton Barr, off West End, Grand Bahama.

Mr. Barr and his friend Hayward "Pinchy" Thomas was diving for lobsters in waters off Sandy Cay, near West End, on Wednesday morning, when he saw a 10-foot tiger shark approaching. Mr. Barr said the shark began to "stalk" them, coming closer and closer.

"We were diving and this big shark come around [and] by the end of the day he didnât act right so I couldnât afford to wait," said Mr. Barr, who tried to ignore the shark but the shark kept advancing.

"So I shot him twice [with the spear gun] and then my friend Pinchey shot him â¦ so we tried to grab something, hook him and spin him over and then we raise his tail up and tie him. He was so heavy that we couldnât put him in the boat. So we tie him along the boat and drown it and pull it into shore," Mr. Barr said.

Mr. Barr said the struggle lasted almost two hours and that it was the first time he has been in any real threat from a shark of that size.

Mr. Thomas also said he felt threatened by the shark that he thought was a great white because it was so big.

"Well we were in the water when we saw him and he was coming close for an attack. I just did what I had to do," Mr. Thomas said.

After Mr. Barr left his catch on a West End dock, another fisherman, Leo Moxey, filet the 283-pound shark for him and discovered that the he was in fact a she, who was carrying 36 pups.

"They usually are around the cay mating this time of year. So if you go out in the evening time or first thing in the morning you can see a whole bunch of them near the beach waiting," Mr. Moxey said.

"Thatâs why they when the divers go in the water and dive in the muddy water they have to be careful because they attack like turtles. Theyâre very aggressive, [both] them and the hammerhead sharks," he said.

Mr. Barr and Mr. Thomas were both unharmed. They shared their catch with the residents of West End but Mr. Barr is keeping the jaws for himself. He said although they killed the shark it was not for sport.

"I really feel bad about that but at the end of the day if I had probably let him live, I probably wouldnât be here today so I thank God Iâm here," Mr. Barr said.