NOAA, University Of Hawaii, Research Maui's World War II Legacy; 'Like Windows Into The Past' 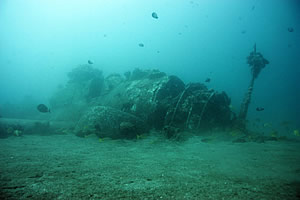 The remains of an SB2C-1C Helldiver carrier-based dive-bomber rest on the seafloor off the Maui coast. credit University of Hawaii 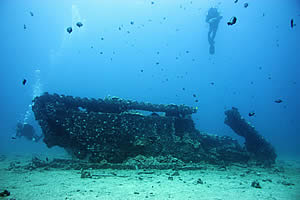 The survey team produced scaled drawings and took photographs of six wreck sites, including a carrier-based dive bomber (SB2C-1C Helldiver); a carrier-based fighter plane (F6F Hellcat); and three amphibious assault vehicles (LVT-4 and LVTA-4s), two with mounted with 75mm howitzers. The documentation is used to evaluate wrecks for deterioration and helps identify when artifacts have been moved or go missing.

Developing these new tactics, however, proved hazardous, as numerous planes and landing craft, and occasionally the lives of young servicemen, were lost around the islands. Today, the legacy of that period can be found in near-shore waters, where sunken aircraft and shipwrecks provide recreational diving sites, as well as habitat for marine species.

"The wrecks along the coast are like windows into the past and they remind us of the sacrifices made during World War II," said Hans Van Tilburg, NOAA maritime heritage coordinator. "The information collected during this project will help us better understand this chapter in our history and its significance to the Pacific."

For now, details surrounding the sinking of the assault vehicles near Makena, Maui, and the specific identity of the F6F Hellcat, remain mysteries pending further historical research. A project web site will be posted soon on the NOAA Maritime Heritage Program webpage. Funding for the project was provided by the University of Hawaii Manoa College of Natural Sciences.