Underwater Sponges And Worms May Hold Key To Cure For Malaria; 'We Haven't Even Begun To Explore The Oceans' Depths'

Pilot School: Learn To Drive A Submarine And Explore The Depths Of The Mediterranean Sea 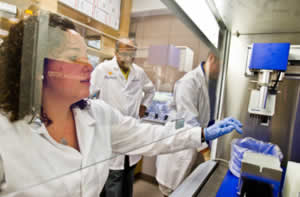 ORLANDO, Florida -- Healing powers for one of the world's deadliest diseases may lie within sponges, sea worms and other underwater creatures.

University of Central Florida scientist Debopam Chakrabarti is analyzing more than 2,500 samples from marine organisms collected off deep sea near Florida's coast. Some of them could hold the key to developing drugs to fight malaria, a mosquito-borne illness that kills more than 1 million people worldwide annually. Chakrabarti is pursuing this study with Amy Wright of Harbor Branch Oceanographic Institute, Fort Pierce, whose team has collected these samples from a depth up to 3000 feet.

Chakrabarti is excited about the early promising results â preliminary tests identified about 300 samples that can kill malaria parasites. He's also concerned, however, that the Gulf of Mexico oil spill may wipe out species that could hold healing properties for many deadly diseases.

"There is a very good possibility that the answers to cancers, malaria and other diseases may be found in the ocean," he said. "Why am I so optimistic? Just consider that the oceans cover 70 percent of the planet. Among 36 of the phyla of life, 34 are found in marine environment whereas the land represents only 17 phyla, and we haven't even begun to explore the oceans' depths.

"But I'm worried. Who knows what we may be losing."

He watches the news while continuing his research in hopes of finding answers to malaria, a disease he's dedicated his life to combating. There is no FDA-approved vaccine for malaria, and people are becoming more resistant to the drugs available to treat it.

So far, Chakrabarti and his two graduate students have conducted preliminary testing of more than 2,500 samples from the Harbor Branch collection. They conducted tests to evaluate growth inhibitory properties of these samples for malaria parasite growing inside human red blood cells in culture.

One active sample derived from a marine sponge contained the compound Nortopsentin. Because of this compound's initial promise, Chakrabarti said, he's already filed an application for patent protection.

Harbor Branch is one of only three organizations in the country that has the capability to collect deep-sea samples. It has submersible vehicles that dive 3,000 feet underwater to collect samples off Florida's coast. Wright directs the biomedical-marine research program at Harbor Branch.

Chakrabarti's approach of identifying new drugs from marine sources builds on prior research around the globe.

In May, the American Society of Clinical Oncology announced results from a Japanese study concluding that the drug eribulin, derived from sea sponges, was effective in helping patients fight breast, colon and urinary cancer. Scientists in Australia are diving into the Great Barrier Reef to explore the potential healing powers of marine creatures living there.

Locally, Gregory Roth, director of medical chemistry and exploratory pharmacology at the Sanford-Burnham Medical Research Institute is working with Harbor Branch on similar research. Sanford-Burnham is one of the UCF College of Medicine's partners at its new health sciences campus in Lake Nona.

Chakrabarti will continue analyzing samples, particularly the 300 already identified as promising, during the next year.

"If we can find two or three good molecules that can be easily synthesized in a lab and that can prevent malaria, I'd be very happy," he said.