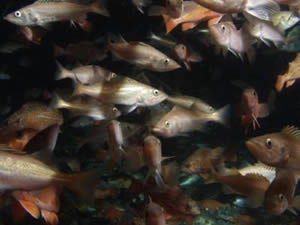 Rockfish thrive with offshore platforms as their home base

SANTA BARBARA, California -- While some observers consider offshore oil and gas platforms to be an eyesore on the horizon, new data shows they are performing a critical function for marine life.

For the first time, scientists have documented the importance of oil and gas platforms as critical nursery habitat for some species of rockfishes on the California coast. Two articles documenting the importance of the platforms are published in the current issue of Fisheries Bulletin, with lead authors from the University of California, Santa Barbara.

The rockfish species called bocaccio (Sebastes paucipinis), which can live up to 50 years, was, until recently, an economically important rockfish species along the West Coast of North America and was abundant from Oregon to northern Baja California. Overfishing has reduced the stock to less than one-tenth of its former population, according to Milton S. Love, a marine biologist with UCSB's Marine Science Institute (MSI). However, the platforms are helping to restore this species.

"This is the first time that we have solid evidence that platforms can be critical habitat for rebuilding some species of rockfishes," said Love.

From the 2003 surveys, the research team estimated that a minimum of 430,000 juvenile bocaccio took up residence at the eight structures. The researchers determined that the 430,000 juveniles equal about 20 percent of the average number of juvenile bocaccio that survive annually for the geographic range of the species. "When these juveniles become adults, they will contribute about one percent of the additional amount of fish needed to rebuild the Pacific Coast population," wrote the authors.

Through regional scuba surveys, the researchers found that in 2003 the population of juvenile bocaccio using natural reefs as near-shore nursery grounds was small by comparison to the populations at the platforms.

According to the researchers, juvenile rockfish need something hard, like a rock overhang or a man-made structure, to "settle out" and develop a home base. Then they join a school and swim around their structure. The school helps to protect them from predators. Staying in one place allows them to eat the plankton that drift by in the ocean currents. If the juveniles were to drift out to sea with the currents, they would likely be eaten by predators, or starve to death once they ate all the nearby plankton floating with them. The platforms provide structures that the rockfishes need to thrive.

"Natural reefs are small," said Love, "and before the time the fish finds one it often gets eaten." By contrast, platforms cover the entire water column.

Brian M. Emery, a physical oceanographer with MSI, is the lead author of a second paper which reports on ocean currents in the region of Point Conception to Point Arguello, north of the Santa Barbara Channel and near Platform Irene. The results of a study of ocean currents, using high frequency radar, show that Platform Irene almost certainly increases the survival of young bocaccio in this region. The study was conducted twice, in 1999 and 2002, from May through August, the season when young bocaccio settle out.

Emery explained that the research team used radar equipment housed at three locations along the coast and provided by the National Oceanic and Atmospheric Administration and the W.M. Keck foundation.

The results showed that, on average, about three-quarters of the young bocaccio settling around Platform Irene would not survive in the absence of the platform. Rather, the prevailing currents would move them offshore where they would have a very low probability of survival.

"Platform location, local current patterns, and natural habitat distribution determine the balance between settlement at a specific platform and settlement on natural habitat," wrote the authors. "These results indicate that knowledge of regional ocean circulation patterns is essential for evaluating the effects of oil production platforms or other artificial habitats on dispersal pathways of juvenile fishes."