NOAA: Half Of U.S. Coral Reefs In 'Poor' Or 'Fair' Condition; 'We Need To Redouble Our Efforts' 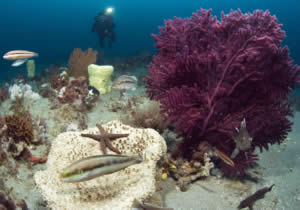 WASHINGTON, D.C. -- A new NOAA report on the health of Gray’s Reef National Marine Sanctuary indicates that the overall condition of the sanctuary’s marine life and habitats is fair. The report also identifies several emerging threats to sanctuary resources, including non-indigenous marine species, overfishing, waterborne chemicals from human coastal activities, and increased recreational use of the site.

The first-of-its-kind report about the sanctuary finds that its water quality is relatively good, although researchers have detected low levels of human-produced pollutants in the sanctuary’s sediments and water-filtering organisms.

The report cites illegal anchoring, recreational fishing and spearfishing as additional human pressures on the living marine resources of Gray’s Reef, and states that snapper and grouper are being overfished both within the sanctuary and throughout the region.

The report also notes that the red lionfish, a voracious and venomous predator native to Pacific waters, has been seen in the sanctuary and may pose a danger to local fish populations and recreational divers.

“Although the news isn’t all good, this report provides us with an important benchmark,” said George Sedberry, sanctuary superintendent. “The data in the report will serve as a baseline that sanctuary staff can use to measure future changes in Gray’s Reef’s extraordinarily valuable and productive marine ecosystem.”

According to the report, additional research in the sanctuary is needed. Sanctuary managers are currently exploring the concept of establishing a research area at Gray’s Reef to better study and understand long-term changes in the sanctuary’s resources and habitats over time.

The sanctuary has already made management and regulatory changes in response to the human-caused pressures identified in the report. A no-anchoring rule went into effect February 2007. A fishing gear rule allowing fishing in the sanctuary only by rod and reel, handline, and spearfishing gear without powerheads also went into effect.

The status and trends of the four main resource categories examined in the report — water, habitat, living resources and maritime archaeological resources — are summarized in a color-coded table ranging from “good” to “poor,” with notes on the basis for the ratings and sanctuary responses to various pressures. Of the 17 resources or questions identified, none of the resources identified was listed in poor condition.

The full report is available online.

Designated in 1981, NOAA’s Gray’s Reef National Marine Sanctuary is one of the largest near-shore live-bottom reefs off the southeastern United States, encompassing approximately 23 square miles. Managed by NOAA, the sanctuary is located 40 miles south of Savannah, Ga., the second busiest port on the eastern seaboard.

Gray’s Reef supports an abundant reef fish and invertebrate community. Loggerhead sea turtles, a threatened species, also use Gray’s Reef year-round for foraging and resting. The reef is also near the known winter calving ground for the highly endangered North Atlantic right whale. NOAA understands and predicts changes in the Earth's environment, from the depths of the ocean to the surface of the sun, and conserves and manages our coastal and marine resources.