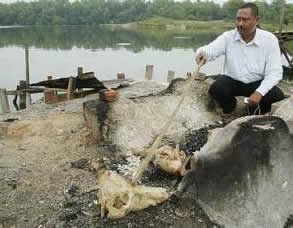 BATU GAJAH, Malaysia -- A raiding government team visiting a fish farm made a horrific discovery when they found that faeces and carcasses were being fed to the popular ikan patin (silver catfish).

The Perak religious department made the disgusting discovery when it raided the farms located in former mining ponds in Bemban here, and in Tronoh and Papan after being tipped off last month.

âThe farm owner at Bemban and workers at the farm in Tronoh openly admitted to feeding the fish with dead pigs,â said department director Jamry Sury.

âI was told the fish are exported elsewhere but Iâm sure they are sold locally too,â he said during a follow-up visit to the three farms yesterday.

A pile of faeces mixed with chicken feathers was discovered next to a cauldron of fish at another part of the farm.

Jamry said his department has no jurisdiction to take action against owners of the farms but could only advise them to discontinue the unhygienic practice.

The matter would be referred to the Domestic Trade and Consumer Affairs Ministry for further action, he added.