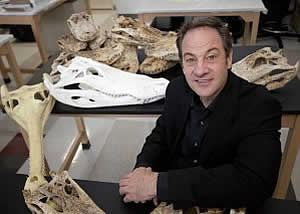 âI have to admit, the first time I placed our meter into the maw of an adult crocodile, I was nervous," Erickson said.

Lately, Erickson, a Florida State biology professor, and his colleagues have been pondering a particularly painful-sounding question: How hard do alligators and crocodiles bite?

The answer is a bite force value of 3,700 pounds for a 17-foot saltwater crocodile (as well as tooth pressures of 350,000 pounds per square inch). That's the highest bite force ever recorded â beating a 2,980-pound value for a 13-foot wild American alligator Erickson's lab measured in 2005. They estimate that the largest extinct crocodilians, 35- to 40-foot animals, bit at forces as high as 23,100 pounds.

Erickson, along with several colleagues, including Florida State biology professors Scott Steppan and Brian Inouye, and graduate student Paul Gignac, reported their findings in the journal PLoS One.

Funded by the National Geographic Society and the FSU College of Arts and Sciences, their study looks at the bite force and tooth pressure of every single species of crocodilian. It took more than a decade to complete and required a wily team of croc handlers and statisticians, as well as an army of undergraduate and graduate students. Erickson describes crocodilian bite-force testing as being a bit like dragon slaying by committee.

"Our work required a team effort," he said.

As a result of the study, Erickson and his team have a new understanding on how these animals became so successful and a better understanding about the remarkable biology of living crocodiles and alligators. They've also developed new methods for testing bite forces.

The data contributes to analyzing performance in animals from the past and provides unprecedented insights on evolution and statistically informed models about other reptiles such as dinosaurs.

The study's findings are so unique that Erickson's team has been contacted by editors at the "Guinness Book of World Records" inquiring about the data.

Over the 11 years that his current study took place in both the United States and Australia, Erickson and his team roped 83 adult alligators and crocodiles, strapped them down, placed a bite-force device between their back teeth and recorded the bite force. An engineering calculation was then used to estimate the force generated simultaneously by the teeth nearest the front of the jaws. The team molded the teeth with dentist's dental putty, made casts and figured out the contact areas. Talk about dangerous work.

As Erickson describes it: "I have to admit, the first time I placed our meter into the maw of an adult crocodile, I was nervous. It was all over in the blink of an eye. When it struck, it nearly wrested my grip from the handle. The noise of the jaws coming together was like a gunshot. The power of the animal was astounding, and the violence of the event frightening."

Overall, the researchers looked at crocodilians both mundane and exotic, from American alligators to 17-foot Australian saltwater crocodiles and the Indian gharial. Among the world's most successful predatory reptiles, these creatures have been "guardians of the water-land interface for over 85 million years," Erickson said. But just how they were able to occupy and dominate ecological niches for so long is a mystery.

Erickson and his team knew that the reptiles evolved into different sizes, from 3-footers to 40-footers, and they showed concurrent major changes in their jaw shape and tooth form, while their body form remained largely unchanged.

"We set out to answer how this anatomical variance related to their ability to generate bite force and pressures for feeding in the different forms and thus how they have been so successful," Erickson said. "The bite force over the contact area is the pressure, which is more pertinent to feeding performance than bite force. Ultimately, it tells us just what they were doing with those prodigious bite forces." And, he added, gators and crocs have comparable maximal bite-force capacity when measured pound for pound. They basically all have the same musculoskeletal design, just different snouts and teeth.

"It is analogous to putting different attachments on a weed eater â grass cutter, brush cutter, tree trimmer, they all have the same type of engine," Erickson said. "There are bigger and smaller engines, with higher and lower horsepower, but they have the same attachments."

His research team is already using the study's data to explore bite-force and tooth-pressure performance in fossil forms. The team is building the world's most sophisticated models for extinct crocodiles and dinosaurs based on the findings, as well as continuing to study the significance of croc snout form.

As for modern-day crocs and gators, well, there's little doubt that they are truly the world's bone-crushing champions. Just remember that old Floridian maxim: Always maintain a healthy distance between yourself and the nearest gator.

"If you can bench-press a pickup truck, then you can escape a croc's jaws," Erickson warned. "It is a one-way street between the teeth and stomach of a large croc."