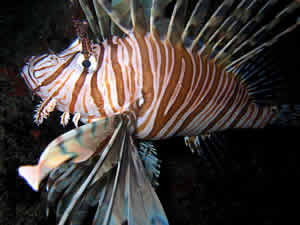 Lionfish in St. Maarten were recently found to be infected with the ciguatera-causing toxin

The Nature Foundation is recommending that the invasive lionfish not be eaten or consumed based on a recently concluded study where flesh samples which were taken of larger lionfish caught in St. Maarten waters showed levels of the poisonous ciguatoxin which causes Ciguatera poisoning.

Ciguatera poisoning is caused by naturally occurring toxins, called ciguatoxins, which are produced by microscopic plants - gambierdiscus toxicus - that live on seaweed and other surfaces within coral reef communities. When fish eat seaweed or algae they consume the organisms and the ciguatoxins build up in the fish's flesh. The toxin is stored in the fishes' body and not excreted - so it builds up as it goes up the food chain. The bigger fish eat the little fish and the toxin gets passed on until it is consumed by humans. Predators at the top of the food chain - like barracuda and lionfish - can end up with large amounts of the toxin in their flesh.

No test can be done to determine if the fish is poisoned and cooking and preparation have no affect on the toxin. The toxin is unrelated to the venom found in the spines of the Lionfish.

"This is very bad news for us as we were planning on promoting lionfish as an edible, commercially viable fish which we hoped would help in reducing its numbers along the reefs. However, before we started telling the community that the fish is edible we wanted to be absolutely sure that there were no health care threats associated with eating the fish. With our partners in the USVI and in the French Islands we tested several samples of lionfish meat and have found that unfortunately an uncomfortably high percentage showed the presence of ciguatoxin in the meat. Therefore we do not recommend that Lionfish be eaten. This is the same toxin which is present in the flesh of Barracudas, large Jacks and large Snapper, which are traditionally also not eaten if caught in our waters. Various countries and territories in the Caribbean have been promoting lionfish as edible. However these areas usually do not have a high level of ciguatoxin in their larger reef fish. The North Eastern Caribbean from Guadeloupe to the Virgin Islands, including St. Maarten, have a higher level of ciguatoxin than most other areas in the Caribbean. So to be absolutely safe rather than sorry, we unfortunately can not recommend the eating of lionfish as a method for controlling them," commented Tadzio Bervoets, Nature Foundation Manager.

Ciguatera poisoning or fish poisoning as it is also known causes nausea or vomiting, diarrhea, electric-shock-like or painful sensations, reversal of hot and cold sensations, intense itching or tingling fingers and toes, slowed heart rate and a drop in blood pressure, weakness or fatigue, muscle or joint pain, depression, and headaches. There is no effective treatment or antidote for ciguatera poisoning and the mainstay of treatment is supportive care.