Researchers: Tags Reveal White Sharks Have Neighborhoods In The North Pacific; 'They're Not Swimming Around Aimlessly'

Researchers Reveal That Sharks Are Hygienic; 'An Important Life Function Which Is Easily Disturbed By Man' 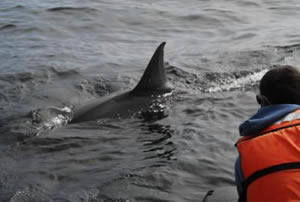 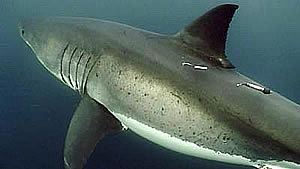 PALO ALTO, California -- The white shark may be the ultimate loner of the ocean, cruising thousands of miles in a solitary trek, but a team of researchers has discovered that the sharks have maintained such a consistent pattern of migration that over tens of thousands of years the white sharks in the northeastern Pacific Ocean have separated themselves into a population genetically distinct from sharks elsewhere in the world.

"White sharks are a large, highly mobile species," said Salvador Jorgensen, a postdoctoral scholar at Stanford's Hopkins Marine Station. "They can go just about anywhere they want in the ocean, so it's really surprising that their migratory behaviors lead to the formation of isolated populations."

Scientists with the Tagging of Pacific Predators (TOPP) program combined satellite tagging, passive acoustic monitoring and genetic tags to study white sharks (Carcharodon carcharias) – popularly known as great white sharks – in the North Pacific. The team consisted of researchers from Stanford University, University of California-Davis, Point Reyes Bird Observatory and the Pelagic Shark Research Foundation, and the details of their study are to be published online Nov. 3 by the Proceedings of the Royal Society B.

The fact that the northeastern Pacific white sharks undergo such a consistent, large-scale migration, and that they are all closely related and distinct from other known white shark populations, suggests that it is possible to conduct long-term population assessment and monitoring of these animals.

Barbara Block, professor of marine sciences at Stanford and a coauthor of the paper, said, "Catastrophic loss of large oceanic predators is occurring across many ecosystems. The white sharks' predictable movement patterns in the northeastern Pacific provide us with a super opportunity to establish the census numbers and monitor these unique populations. This can help us ensure their protection for future generations."

The researchers used a combination of satellite and acoustic tags to follow the migrations of 179 individual white sharks between 2000 and 2008. These sharks were adults or sub-adults that ranged in size up to 4,000 pounds, and were individually tagged at sites along the central California coast, including the Gulf of the Farallones, Tomales Bay and AÃ±o Nuevo. The electronic tags reveal that the sharks spend the majority of their time in three areas of the Pacific: the North American shelf waters of California; the slope and offshore waters around Hawaii; and an area called the "White Shark CafÃ©," located in the open ocean approximately halfway between the Baja Peninsula and the Hawaiian Islands.

"The thing we've learned about white sharks," said Scot Anderson, a marine biologist with the National Park Service, who has been involved in white shark research in Northern California for more than two decades, "is that they're not swimming around aimlessly – they are very selective predators." Anderson is a coauthor of the paper.

Based on years of data demonstrating that the white sharks were homing with high fidelity back to California, the research team placed acoustic listening receivers on the ocean floor at sites thought to be high residency areas, or "hot spots."

By attaching 78 acoustic tags that create a unique "ping" or acoustic code for each tagged shark, the researchers were able to detect when the white sharks came within 250 meters (820 feet) of a receiver. This allowed the researchers to discern their pattern of coastal movements in high detail. The acoustic-tagged sharks spent time at four key sites along the central and northern California coast, each of which supports large colonies of seals and sea lions: Southeast Farallon Island, Tomales Point, AÃ±o Nuevo Island and Point Reyes. The tags revealed that often sharks had favorite sites where they would remain resident for up to 107 days, although they occasionally would make brief visits to the other nearshore hot spots.

"The sharks were detected frequently at their chosen site," Jorgensen said, "which means that they are patrolling around there nearly constantly, for long periods of time. They will occasionally visit one of the adjacent sites, but they always come back."

The team also was surprised to learn about new movements that the acoustic tags revealed in some nearshore locations. They found five white sharks were detected on acoustic receivers beneath the Golden Gate Bridge that originally were installed to listen for salmon, which migrate from the bay to the sea and back again. There are currently no detectors in San Francisco Bay, so there are no data to indicate how far or why the sharks crossed into the bay; however, seals and sea lions are in the region and could be potential prey for the large sharks. Five sharks also were acoustically detected close to shore in Hawaii off Waialua Bay and Kualoa Point on Oahu, and off the coast of Kona.

Genetics techniques were used to examine the relationships of the California sharks to all other white sharks examined globally. Studies of maternally inherited mitochondrial DNA sequences show that the populations are distinct, and suggest that the northeastern Pacific population may have been founded by a relatively small number of sharks in the late Pleistocene – within the last 200,000 years or so. The other populations of white sharks are concentrated near Australia and South Africa.

Molecular geneticist Carol Reeb, a research associate at Stanford, said, "If you had asked us a few years ago, we would have said white sharks found in California probably migrated throughout the Pacific. Now, even though we know they travel great distances, their paths are surprisingly constrained to specific routes. This explains how a highly migratory marine species becomes a genetically isolated population. This also makes it much easier to appreciate how vulnerable the northeastern Pacific white shark population could become if too many individuals were taken as either catch or bycatch, since these sharks do not appear to interbreed with other shark populations."

Christopher Perle, a Stanford graduate student in biology, is also a coauthor of the paper. Other coauthors are A. Peter Klimley, an adjunct associate professor at UC-Davis; Taylor Chapple, a graduate student at UC-Davis; Sean Van Sommeran, executive director of the Pelagic Shark Research Foundation; Callaghan Fritz-Cope, operations director of the Pelagic Shark Research Foundation; and Adam C. Brown, of the Point Reyes Bird Observatory.