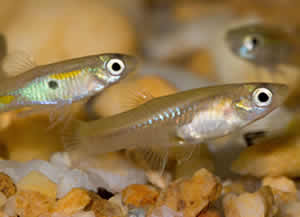 RIVERSIDE, California -- Does the environment encountered early in life have permanent and predictable long-term effects in adulthood? Such effects have been reported in numerous organisms, including humans.

But now a biology graduate student at the University of California, Riverside reports that how individuals fare as adults is not simply a passive consequence of the limits that early conditions may impose on them. Studying how adult Trinidadian guppies (small freshwater fish) responded to their early food conditions, Sonya Auer found that the guppies had compensated for a poor start to life in unexpected, and potentially adaptive, ways.

"Adult guppies were able to mitigate the potential negative effects of early setbacks, such as poor conditions during early stages of growth and development, by being flexible in their growth and reproductive strategies," said Auer, who works in the laboratory of David Reznick, a professor of biology.

Study results appear in the December 2010 issue of The American Naturalist.

To study how adult guppies responded to early food conditions, Auer raised two batches of juvenile guppies separately on low and high food levels in the lab. Once they reached sexual maturity, she switched half of the females from each juvenile food level to the opposite adult food level and kept the other half on the same ration trajectory received during the juvenile stage.

She then measured adult responses in somatic growth, reproductive rate, reproductive investment, number of offspring, offspring size and female body condition to juvenile growth history, how these responses changed with age and how they affected overall reproductive success under low and high adult food conditions.

"Entering adulthood, they were subsequently limited in the amount of time they had to produce babies, the number of babies they could carry at one time, and the amount of energy they could invest in reproduction," she said. "However, females reared on low food were able to replenish their fat reserves, increase their growth rate to make up for their small body size, and produce more babies to compensate for their delayed maturity. The end result was that they were able to achieve the same reproductive success as females reared on high food, regardless of the quality of the adult environment."

Next, Auer plans to study how guppy growth and reproductive strategies respond to seasonal variation in food availability in the wild.

Female guppies used in the experiment were the offspring of first generation descendents of fish collected in 2008 from a downstream, high predation site on the Aripo River in the Northern Range Mountains of Trinidad.