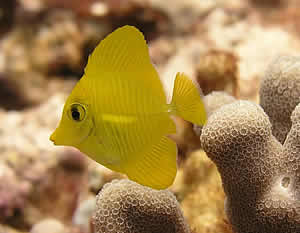 This tropical fish has recovered off the coasts of Hawaii's big island, following the establishment of marine reserves. Photo by Sarah McTee 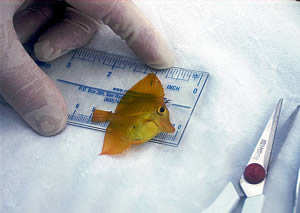 Researchers from Oregon State University analyzed and made genetic measurements of yellow tang, a tropical fish from Hawaii. Photo by Sarah McTee

CORVALLIS, Oregon -- Marine ecologists at Oregon State University have shown for the first time that tiny fish larvae can drift with ocean currents and "re-seed" fish stocks significant distances away â more than 100 miles in a new study from Hawaii.

The findings add credibility to what scientists have believed for some time, but until now been unable to directly document. The study also provides a significant demonstration of the ability of marine reserves to rebuild fishery stocks in areas outside the reserves.

The research was published this week in PLoS One, a scientific journal.

"We already know that marine reserves will grow larger fish and some of them will leave that specific area, what we call spillover," said Mark Hixon, a professor of marine biology at OSU. "Now we've clearly shown that fish larvae that were spawned inside marine reserves can drift with currents and replenish fished areas long distances away.

"This is a direct observation, not just a model, that successful marine reserves can sustain fisheries beyond their borders," he said. "That's an important result that should help resolve some skepticism about reserves. And the life cycle of our study fish is very similar to many species of marine fish, including rockfishes and other species off Oregon. The results are highly relevant to other regions."

The findings were based on the creation in 1999 of nine marine protected areas on the west coast of the "big island" of Hawaii. They were set up in the face of serious declines of a beautiful tropical fish called yellow tang, which formed the basis for an important trade in the aquarium industry.

"This fishery was facing collapse about 10 years ago," Hixon said. "Now, after the creation of marine reserves, the fishery is doing well."

The yellow tang was an ideal fish to help answer the question of larval dispersal because once its larvae settle onto a reef and begin to grow, they are not migratory, and live in a home range about half a mile in diameter. If the fish are going to move any significant distance from where they are born, it would have to be as a larva â a young life form about the size of a grain of rice â drifting with the currents for up to two months before settling back to adult habitats.

Mark Christie, an OSU postdoctoral research associate and lead author of the study, developed some new approaches to the use of DNA fingerprinting and sophisticated statistical analysis that were able to match juvenile fish with their parents, wherever they may have been from. In field research from 2006, the scientists performed genetic and statistical analyses on 1,073 juvenile and adult fish, and found evidence that many healthy juvenile fish had spawned from parents long distances away, up to 114 miles, including some from marine protected areas.

"This is similar to the type of forensic technology you might see on television, but more advanced," Christie said. "We're optimistic it will help us learn a great deal more about fish movements, fishery stocks, and the genetic effects of fishing, including work with steelhead, salmon, rockfish and other species here in the Pacific Northwest."

This study should help answer some of the questions about the ability of marine reserves to help rebuild fisheries, the scientists said. It should also add scientific precision to the siting of reserves for that purpose, which is just one of many roles that a marine reserve can play. Many states are establishing marine reserves off their coasts, and Oregon is in the process of developing a limited network of marine reserves to test their effectiveness. The methods used in this study could also become a powerful new tool to improve fisheries management, Hixon said.

"Tracking the movement of fish larvae in the open ocean isn't the easiest thing in the world to do," Hixon said. "It's not like putting a radio collar on a deer. This approach will provide valuable information to help optimize the placement of reserves, identify the boundaries of fishery stocks, and other applications."

The issue of larval dispersal is also important, the researchers say, because past studies at OSU have shown that large, fat female fish produce massive amounts of eggs and sometimes healthier larvae than smaller fish. For example, a single two-foot vermillion rockfish produces more eggs than 17 females that are 14 inches long.

But these same large fish, which have now been shown to play key roles in larval production and fish population replenishment, are also among those most commonly sought in fisheries.

The study was done in collaboration with the University of Hawaii, Washington State University, National Marine Fisheries Services and the Hawaii Department of Natural Resources. It was funded by Conservation International.

"The identification of connectivity between distant reef fish populations on the island of Hawaii demonstrates that human coastal communities are also linked," the researchers wrote in their conclusion. "Management in one part of the ocean affects people who use another part of the ocean."