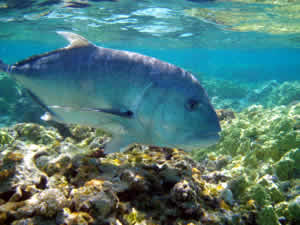 WASHINGTON, DC -- Marine life and habitats at Papahānaumokuākea Marine National Monument are in good overall condition, but face emerging threats, according to a new NOAA report on the monument’s health.

Prepared by NOAA's Office of National Marine Sanctuaries, the peer-reviewed Papahānaumokuākea Marine National Monument Condition Report notes that due to the monument’s remoteness, past management efforts, and regulations that limit access, impacts from local human uses are relatively few.

However, past activities have permanently altered some areas and in some cases resulted in degradation of habitats. Other concerns for the monument include climate change and coral bleaching, diseases affecting marine organisms, and marine alien species that can threaten native biodiversity and degrade habitats.

The report highlights the need to address potential impacts to key habitats and declining conditions of some living resources (Hawaiian monk seals, resident seabirds, and migratory shorebirds). It also states that a better understanding of the region’s biodiversity and marine archaeological resources is key to protecting the monument.

In addition, the report emphasizes the monument’s commitment to recognizing and perpetuating the unique relationship of native Hawaiians to the land, sea and their cultural traditions.

“Incorporating traditional values and ecological knowledge into the natural resource management of the Northwestern Hawaiian Islands will be an important part of all management initiatives in this region,” said Wilhelm.

The report is the first of its kind about the monument and provides a baseline for monitoring changes to its resources and identifying research and management priorities. It also helps set the stage for the development of a natural resources science plan for the monument. Similar reports are being developed for the other sites in the National Marine Sanctuary System.

Nominated for consideration as a UNESCO World Heritage Site honoring its natural and cultural heritage, Papahānaumokuākea Marine National Monument is administered jointly by three co-trustees – the Department of Commerce, Department of the Interior and the State of Hawai‘i – and represents a cooperative conservation approach to protecting the entire ecosystem.