Florida Marine Lab Tags Two Whale Sharks; 'Unusual To Be Able To Tag Them Here Off The Florida Coast' 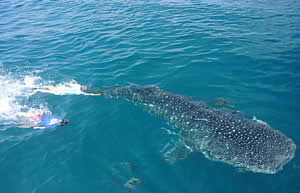 SARASOTA, Florida -- Friday brought an unexpected surprise visit to the waters off Sarasota: two whale sharks cruising just offshore. Each was more than 20 feet long. The visit offered a rare opportunity for Mote Marine Laboratory scientists to outfit the sharks with satellite tags.

Capt. Brian Marcey of BreakWater Charters had a full boat of anglers Friday morning about 10 miles offshore when he spotted something in the water. After he realized he was looking at two whale sharks, he called Mote.

"I was just in the tower of my boat looking for fish, when I saw a disturbance in the water," he said. "I kept watching and it turned out to be two whale sharks. None of my clients had ever encountered anything like that before. They had a blast."

After Mote Capt. Dean Dougherty got Marcey's call, he alerted Dr. Robert Hueter, director of Mote's Center for Shark Research. Hueter quickly pulled together a team to tag and record the sharks' visit. One of the tagged sharks was a mature male about 25 feet long; the second was a female about 23 feet long.

"It's not really unusual to have whale sharks in the Gulf of Mexico," Hueter said. "But it is unusual to be able to tag them here off the Florida coast."

Hueter has been studying whale sharks off Isla Holbox in Mexico's Yucatan Peninsula since 2003. The sharks gather there annually in the hundreds to feed on plankton. Using satellite tags, he has recorded the sharks' deep dives - about a mile - and some of the great distances they travel - one shark Hueter tagged traveled nearly 5,000 miles.

Now, with these two sharks tagged, Hueter can learn more about the movement patterns of the sharks that visit the eastern Gulf of Mexico. One tag, called a Smart Position or Temperature transmitting tag, or SPOT, will immediately begin transmitting the shark's location information to Hueter back in the lab. The second, called a Pop-up Archival Transmitting tag, or PAT, will record the shark's movements over the next 90 days. At that point, it will detach from the shark, float to the surface and beam its information to a satellite that will, in turn, beam it back to Hueter.

With the oil spill in the Gulf of Mexico, it will be especially important to see where the sharks go, Hueter said. "Whale sharks are essentially filter feeders that eat plankton," he said. "Oftentimes, that means they will feed at the surface where the plankton is floating. Unfortunately, right now, oil also happens to be floating on the surface of the Gulf of Mexico. Will the sharks stay away from the spill? We just don't know. And because they're deep divers, they could also encounter underwater plumes of oil and oil dispersants."