Epidemic This Year? Check The Lake'S Shape; 'Physics Gets The Epidemic Going'

Philippines Authorities Check Report of New Oil Slick; 'It's Not a Threat' 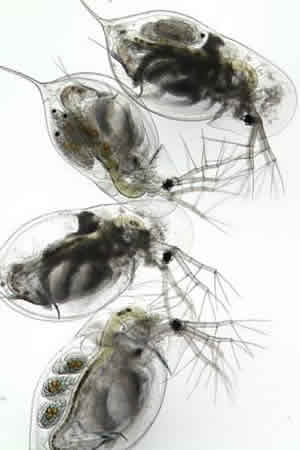 Image shows two Daphnia dentifera that are infected with the fungus Metschnikowia bicuspidata (from the top, first and third). Photo by A.J. Tessier

BLOOMINGTON, Illionois -- Of all the things that might control the onset of plankton disease epidemics in Michigan lakes, the shape of the lakes' bottoms might seem unlikely.

But that's indeed the case, according to a paper published in the May issue of the journal BioScience.

"We're looking at the zooplankton that are infected, the fish and other creatures, the ecology, the limnology, and even the physics. Of all those explanations, the shape of the lake basins is the most powerful factor."

"This paper is a synthesis of research on a model system for the study of disease ecology," said limnologist Alan Tessier of NSF's Division of Environmental Biology.

"It combines limnological, epidemiological, ecological and evolutionary perspectives to address a general question about the occurrence of epidemics in nature," he said. "It also illustrates the value of interdisciplinary approaches to understanding the emergence of patterns in systems of complex biotic and abiotic interactions."

The disease in question is caused by a fungus in the water that infects the filter-feeder Daphnia dentifera, a water flea that plays a critical "grazer" role in many freshwater lakes in the U.S. Midwest.

The fungus slowly consumes the tiny crustacean's blood (hemolymph) and produces spores that fill all that remains.

For the fungal spores to make it to the next potential host, the Daphnia host's exoskeleton must be opened--and it must be opened in an area where the spores are exposed to living, uninfected Daphnia dentifera.

Whether that happens can be predicted by whether the lake bottom is V-shaped, with gently sloping sides, or U-shaped, with walls that descend rapidly away from shore.

The topography of lake bottoms has profound consequences for the lakes' ecology and movement of water that's driven by surface and subsurface temperatures.

Lakes with U-shaped bottoms have fewer near-shore nursery areas, and as a result, bluegill fish populations tend to be lower. Bluegill are a major Daphnia dentifera predator.

With fewer bluegill in lakes with U-shaped bottoms, Daphnia tend to be larger, and larger Daphnia have a higher chance of eating spores and becoming infected.

Fewer bluegill also means more Chaoborus, an invertebrate that is eaten by bluegill--and that itself eats Daphnia dentifera.

Unlike bluegill, which tend to eat Daphnia dentifera cleanly and excrete a heavy spoor that quickly sinks to the lake bottom (and probably out of the ecological picture), Chaoborus are "messy" eaters that chew up Daphnia and spit much of the exoskeleton--and spores contained in it--back out.

This invertebrate predator then spreads spores of the parasite and catalyzes epidemics.

With the scene set, all that's needed, Hall said, is a beginning.

As evening air and/or late summer storms cool the near-shore waters of U-shaped lake basins, the water sinks until it reaches waters of similar temperatures, at which point the waters move away from shore.

This creates a flow that brings nutrients (and latent spores) from shore out to the middle of the lake, where more Daphnia dentifera and Chaoborus live.

Some of the spores may sink to the lake bottom and out of the picture, but during the day, the warmth of summer and fall air keeps the near-surface waters turbulent. That creates a churning effect.

Spores are pulled upward and remain available for Daphnia dentifera to eat. Spore-containing waste produced by Chaoborus and bluegill near shore can re-feed the system in subsequent evenings, as cool air drives near-shore waters back to the lakes' centers.

"This research also gets at a bigger issue--how do the basic features of habitats drive major biological phenomena?" Hall said. "Understanding the relationship between the spatial aspects of habitats and what happens within them will be a major focus of future study."